The Kanifing Magistrates Court presided over by principal Magistrate Sanaibou Wadda Ceesay on 31st March 2009 cautioned and discharged one Sulayman Ceesay who was alleged to have stolen some Irish potatoes from one Sheikh Omar Sey valued at D60.00

Before discharging the accused person the Magistrate told the court that with the accused's plea of guilty without wasting the court's time, the court would therefore exercise its leniency.

She warned the accused to desist from stealing adding that the court has no time for thieves.

She therefore cautioned and discharged the accused accordingly.

According to the facts as narrated by 2118 Gomez, it happened on at Serrekunda while the police were on patrol. He told the court that they saw the accused in the shop of one Sheikh Omar Saine with some Irish Potatoes.

According to prosecutor Gomez the accused was arrested and later taken to Serrekunda police station where he was cautioned and charged with the offence committed. 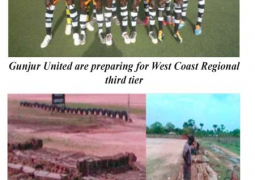