It is inevitable that the issue of population growth tends to attract the most attention when it concerns large countries with sizeable populations, but the same issue in small countries can magnify the problem. The West African state of The Gambia had a population of 1,228, 862 in 2000, by 2019 it had risen to 2,255,608 and by 2050 is projected to reach 4,981,357 (Source: www.populationpyramid.net/gambia/2050/). This is placing a tremendous strain of on land and is exacerbating the problems already facing urban centres, especially the Kanifing District of the capital Banjul. With the World Bank having estimated that the urbanization rate currently stands at 4.2% difficulties look set to increase for the foreseeable future.

As things stand the chief difficulties facing Banjul are as follows:

•           Land for settlement in Banjul is at a premium and becoming prohibitively expensive.

•           Low lying land that is prone to flooding is being settled on by new settlers from rural districts.

•           Urban infrastructure is increasingly being shown to be incapable to cope with growing demand.

•           Precious agricultural land beyond the peri-urban parts of the city is being swallowed up.

•           Savanna woodlands are being lost and natural habitats including mangrove swamps being encroached upon in the desperate quest for land.

•           Banjul’s urban sprawl is at odds with the country’s eco-tourism credentials.

The vast majority of those affected by these problems are the rural poor who move to Banjul in search of a better life and opportunities, that said, some urban poor are also being adversely affected as they often are forced to move out of certain neighbourhoods due to rent rises caused by landlords cashing in on rising demand. Unplanned settlements such as Ebo Town, with a population circa population of 70,000 (Source: UNISEF), are especially vulnerable, not least because ‘residents’ live in fear of being moved on at a moment’s notice. There are added difficulties caused by the low-lying nature of the settlement which is prone to flooding from elsewhere in the city, and this often includes untreated sewage with all the attendant problems that go with it. Such areas have an increased risk of mosquitoes, and thus potentially malaria. Thus, a situation has arisen that is seeing those least able to survive the vicissitudes of life endeavouring to survive in areas that are detrimental to health, well-being, opportunity and material advancement. Evidently the issue of spatial justice is a factor, as is that of the paucity of opportunity to affect positive outcomes, a fact not helped by low levels of literacy, especially for people from rural areas.

Kolley et al (2017)  having explored the history and spasmodic development of planning in Banjul from Colonial times onwards have made a number of recommendations, these include; “considerable re-training and attitudinal re-direction for the leadership and governing leaders of the city”, improving the quality and quantity of data collected and ensuring that the Planning Board actively engages and consults with Civil Society groups. In addition, there are issues about land tenure to consider as well as wider environmental concerns arising from the fact that 97% of households in The Gambia use firewood for fuel (Source: UNDP 2012). The Gambia is a patriarchal society where traditionally women have had much less say, and this is an issue that warrants attention if the disparities in society are to be addressed in a meaningful manner for the good of all. There are also legitimate concerns over provision for and attitudes to people with disabilities, their situation becomes ever more marginalised by the fact that other issues associated with urban overcrowding are deemed to be far more pressing.

With these in mind it is noteworthy and rather ironic that from 22nd October to the 5th November 2013 The African Commission on Human and Peoples’ Rights, meeting at its 54th Ordinary Session was held in Banjul, The Gambia. At this meeting the following Resolution 262 was on Women’s Right to Land and Productive Resources, among other things it voiced that it was:

i)          provide legal protection to women against forced evictions and dispossession of land for use by public and private actors;”.

Progress to date has been fitful at best, that said, following years of political tension The Gambia has appeared to have turned a corner and begun to normalise its relations with the rest of the world, including its re-joining The Commonwealth in 2018. President Adama Barrow is committed to seeking to attract inward investment, as well as reaching out to organisations and partners that can help the country move forward. The degree to which the likes of Kanifing Municipal Council have the leadership, resources and the foresight to address current problems and prepare for the challenges that future population growth will bring remains open to question. 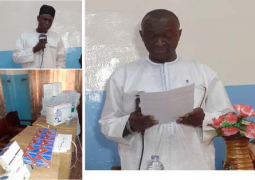