Politicians Should go back to School - Global Campaign for Education

Global Campaign for Education has made a strong case for the education of politicians. In a press release issued recently on the occasion of the 2008 Global Week of Action, an annual event promoted by the Global Campaign for Education (GCE), it is indicated that politicians are the target of this year's event. In The Gambia the event is being organised by the Education for All Campaign Network who intend to invite as many politicians as possible back to school so that they can learn about the importance of Education for All (EFA), and about reaching out to those excluded from education.

The Global Action Week 2008 called for an end to all forms of exclusion from quality education. According to the release, in order to ensure that Education for All is truly achieved, the challenge is not merely to guarantee universal access to education but equally to ensure that the education provided is of good quality.

The release further disclosed that since the start of the Global Week of Action, more than 30 million more children have enrolled in schools and remained within, while the number of children out of school globally is now down to 80 million and illiterate adults to 800 million. Some poor countries have dropped school fees, and in The Gambia, the Girls Education Programme being implemented by government and its partners has increased access, retention and the performance of girls in schools. Some rich countries have given more aid directly to education in poor countries. The release acknowledged what it called the political will shown by governments through making public statements on education but deplored that progress was still way off target for the EfA goals to be met. "This year, 2008, is the mid-way point for the achievement of the EfA goals. All children must have started school in 2009 if they are to have received a basic education by 2015," the release stated, adding that 60 years have elapsed since the Universal Declaration of Human Rights (UDHR). It recollected that Article 26 of the UDHR states that every one has the right to education and that basic education shall be free and compulsory.

The release went on to outline the Education for All goals, as agreed in Dakar in April 2000, as follow:

Goal 2 - Provide free and compulsory primary education for all

Goal 3 - Promote learning and skills for young people and adults

Goal 6 - Improve the quality of education

The Global Campaign for Education and EFANET is calling for governments in developing countries to:

* Develop costed ten-year strategies for the achievement of the full Education for All agenda by 2015.

* Ensure that 20% of national budgets and 6% GNI are allocated to education.

* Ensure that 3% of Education Budgets are allocated to Adult and Non-Formal Education.

* Include specific measures to reach marginalised and excluded learners.

* Introduce policies and practices to achieve gender equality in education.

* Abolish all fees and charges in education

* Include specific measures to improve quality of education.

"Whilst some of these measures have already been achieved in The Gambia, there are still gaps and children and adults are being excluded from education," the release concludes. 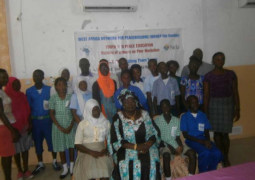