Following US President Barack Obama's announcement of sending additional 30,000 troops to in a thirty-five minutes speech delivered at the US Military Academy at West Point, the United States Embassy in invited local politicians and journalist to share their opinions on the issue. Those invited included Hamat Bah of the NRP, Landing Jallow Sonko, Yaya Jallow, Madi K. Ceesay of the Daily News and Ebrima Sawaneh of the Point Newspaper.

In her welcoming statement, Cindy Crigg, the Deputy Chief of at the American Embassy in said the purpose of inviting journalists and politicians was to express their feelings on ’s decision to send additional troops to .

First to speak was an erstwhile politician during PPP regime, Yaya Jallow who welcomed US President’s intention of sending an additional 30, 000 troops to .

According to him, President’s intention of sending more troops to should be based on dialogue rather than military action. He said ’s neighbours should not be isolated in the dialogue, if US President wants to bring a lasting peace in that area. He also stated that fight against Taliba should not be seen as a terror against Islam but a fight against terrorists whose main intention is to destabilise the for no justifiable reason.

Hamat NK Bah, a politician stated that fighting terrorists in and is not geared towards fighting Islam but to eliminate Al-Qaeda extremists in the and the world at large. Hamat noted that sending additional troops to is a welcome news but emphasised that mission in should be based on fighting terrorists and nothing else.

According to him, people should not interpret US President’s intention in as a religious sentiment, but a fight that would bring lasting peace and harmony to the . He said terrorism is one of the biggest threats of the whole world today, and condemned all those who disguised themselves in the name of Islam to inflict terror on innocent lives.

For his part, Ebrima Sawaneh of the Point Newspaper said the millions of dollars spent on such wars could be better utilised on developing countries, while urging for more dialogue in solving such conflicts rather than using military might.

Mr. Sawaneh cited where several lives were lost, and therefore expressed concern that similar situation may happen in . He also added that even if such troops succeeded in dismantling the Taliban, he is worried that they might find another safe heaven somewhere else. 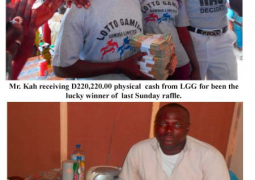