Drammeh told the court that he is attached to Kalagi Police Station as traffic officer, and he recognised the accused in Kanwally.

He said on 29 November 2013, he was at the station when he received a call that an accident occur in Kanwally, adding that he rushed to the scene immediately and on arrival he realized that it involved two vehicles.

PW2 said the other one was a stationery truck with a left flat tyre packed half way off the road loaded with goods heading to Kalagi, while the other vehicle was a Pajero coming from Banjul going to Basse being driven by the accused.

He said the Pajero hit the truck and somersaulted and fell, adding that the victims including the driver were all rushed to Bwiam clinic where the permanent secretary, Malang Jatta, was pronouncing death.

He said the driver was treated and was taken back to the scene and the sketched plan was taken in his presence.

The sketched plan together with the photograph and the warning letter was shown to the witness for identification, which he did. 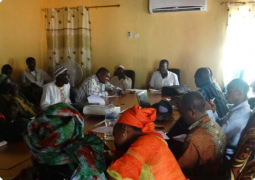