Mr. Sanneh is standing trial on charges of given false information to a public officer, obtaining money by false pretence, stealing by the director or officer of the company, and making false document.

In his testimony before Magistrate Nkea of the Brikama Magistrates' Court, Inspector Ndure said that sometime in 2009 he was part of the panel that investigated the accused, Karafa Sanneh.

He said he came to discover that some cash of Solifo Investment Company was used by the accused Karafa Sanneh, and some receipts were also discovered belong to Solifo Company. He also said a red vehicle was also recover from one Buba Bojang.

Inspector Ndure further stated that during the investigation, Buba Bojang informed the panel that he was instructed by the accused person to withdraw money from the Solifo account at Access Bank in order to purchase the said vehicle, a red Benz with registration number BJL 4558 B.

He added that the vehicle was confiscated, and it was parked at police headquarters for almost one year because one of the tyres had run down.

The police prosecutor ASP Trawally applied to tender the photograph of the said vehicle as an exhibit on the grounds that one of the tyres had run down and, therefore, the vehicle cannot brought to court.

However, the defense counsel, Buba Jawo objected to the tendering of the photograph.

According to him if the vehicle cannot be brought to court then the court has to move to the location. The defence counsel's objection was upheld. Hearing continues. 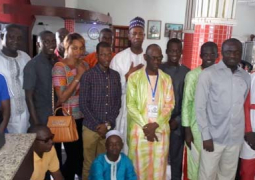