(Friday 3 September 2010 Issue)
Despite government and its development partners' intervention to improve agricultural productivity, particularly in the rural areas, some farmers still call for more assistance in their quest for self-food sufficiency.

Many farmers who spoke to our correspondent in their various rice fields in Kuntaur, Wassu and Fulla Kunda in Central River Region North complained of inadequate farming tools and the high cost of fertilisers.

According to one Mariama Jaiteh, who was found threshing her rice manually, she has to hire for the services of other people to help harvest and thresh her seasonal plots to avoid wasting more time as the demand for the machines is high in the area.

Although there are threshing machines, they are not enough compared to the farming communities. And some of the farmers who cannot afford to pay the fee for the threshing machine, could simply hire the services of local people who are paid in kind. She appealed for timely availability of fertiliser at an affordable price.

For one Buba Touray of Wassu village, despite the government's efforts in supporting farmers to maximise productivity to end household food crises and reduce poverty, there is more to be done since farmers are still facing many challenges.

According to him, their lands are fertile and fit for tilling, but they need enough farm tools and fertiliser to grow enough to eradicate hunger and poverty.

He used the opportunity to call on all development partners, particularly those in the food and agricultural sectors, to tirelessly support the government in her drive towards food self sufficiency.

George Sunn, the head of the ROC mission in Kuntaur, revealed that his office doors are open to farmers, and that they are there to render technical support to them where possible.

He encouraged all categories of Gambians to embrace agriculture, since he believes farming should not be seen only as poor man's work.

"Farmers need to work harder by cultivating big farms if they want to be food self-sufficient, and should be going to work in their fields rather than going to lumos (weekly local markets) every day," he challenged.

He pointed out that ROC and Gambia Government are working closely to ensure that necessary support is provided to farmers based on a policy of promoting productive and sustainable agriculture to meet food security. 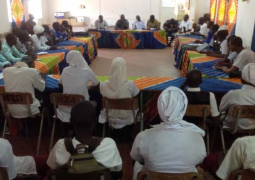