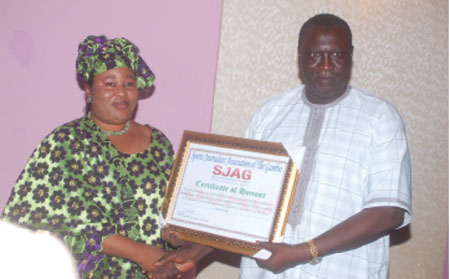 The Managing Director of The Point newspaper, Pap Saine, has congratulated the Sports Journalists Association of The Gambia for its incredible and outstanding annual award ceremony held at the SunSwing Hotel in Kololi last Saturday.

This year’s award has been the 4th edition of its annual award ceremony since the inception of the association, which marked another significant day for all sports journalists in The Gambia.

In an exclusive interview with Pointsports, the Managing Director of The Point newspaper, Pap Saine, who was also a receiver of an honour from the Sports Journalists Association of the Gambia (SJAG) for his contribution to Gambian sports  did not hide his affection over the remarkable performances showcased by sports reporters in the nation.

Mr Saine being the honorary life president of the SJAG, said he is happy for being honored by his colleagues and took the opportunity to give back the award to all sports journalists in the country.

He said he has been in the profession for the past 42 years and thanked the journalists for their commitment and dedication.

He said he is glad with the way and manner the young journalists have handled the profession in the country.

He thanked the staff of The Point, the sporting fraternity, his business partner Maria Hydara and most especially his wife and all those who have supported him during his career.

The work is challenging but he would always do everything possible to overcome the challenges, he said, while appealing to all the sports federations to work harmoniously and support sports journalists of the country.

“I want to seize this opportunity to appeal to the (sports) ministry, especially the Minister, to work closely with sports journalists,” he said, adding that the aim of the sports journalists is to promote sports in The Gambia.

Mr Saine revealed that without the collaboration of the sports authorities, challenges in the sports domain cannot be met.

He said whatever is necessary to give a concrete criticism, journalists should do it without hesitation.

He added: “Whenever journalists want to assess news, they must have facilities from the authorities. I want to urge all the federations to open their doors to the media, as without their collaboration, there will be no effectiveness in sports in the country.

“We have suffered a setback all these past five years; therefore in my view, we need a national conference to see how best we can restore all the necessities in sports.”

Mr Saine said that lots of funds are needed to finance games, adding that sports is not a leisure but a business and investment hence all must come onboard  to support and promote sports in the country.

Encouragement should start from the grassroots to the divisional level, he said, calling on the relevant authorities to do everything possible to revive the games of all various sporting activities.

He further thanked all friends and families for the encouragement he had from them during his sports journalism stint.

Mr Saine, who covered numerous events in the world and happened to be first the president of the SJAG, urged the young ones to emulate his steps.

After serving the association for two consecutive terms as president, he gave chance to Namory Trawally and the current president Sainabou Kujabi-Njie to continue the service, Mr Saine said, adding that they have done well in the promotion of sport in the country.

He however, he appealed to all parastatals, financial institutions and the government to support the sports journalist association to continue to organize such an event annually to reward excellence and hard work in sport. 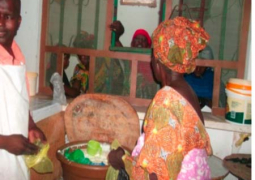