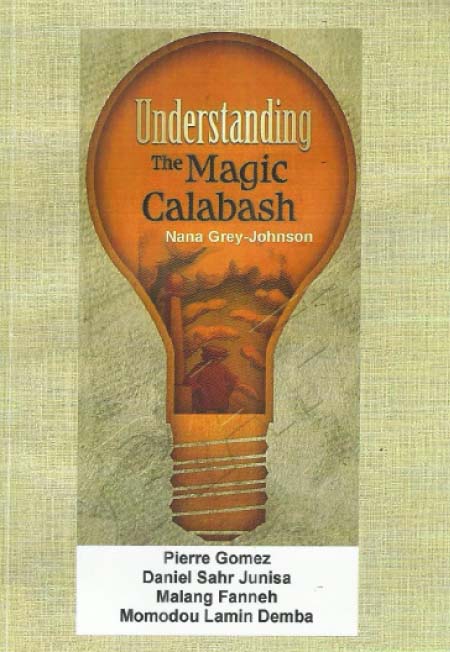 Dissecting a gem of Gambian literature

Here is a neatly packaged book from Fodeh Baldeh’s Fulladu publishers about one of the great success of Gambian literature Nana Grey Johnson’s The Magic Calabash, a novella I have always said was the most highly politically charged work by this our great Gambian author.

For the past ten years, this book which was first self published two decades ago, has been a must read for many Africans pupils in Junior secondary school from Uganda to Gambia. The Exams councils have done Gambian authorship a great homage by making The Magic Calabash a recommended school text. It is view of this that Pierre Gomez, Junisa, Demba and Fanneh co-authored this guide to understanding the beautiful novel.

In normal ways, a guide cannot and must not be a substitute for the real stuff; a guide should be just that, a guide to help the student navigate through the labyrinth of setting, characterization, plots and other narrative techniques such as irony, symbolism, simile in the text. Yet, the authors have done such an exhaustive work that If one reads their guide, it will be well nigh unnecessary to rummage through the real novel it self. I am not surprised by such a thorough job; all the authors are seasoned literary teachers, critics and writers. They have indeed manifested their mettle in this book.

For example, they  have succinctly charted the plot and setting of the book in the early chapters to set the stage for the future discourse. They explained in page 9 that the plot is simple yet complex: simple in that it is like teleological narrative of the ups, ups, ups and damned downfall of the main Character Erubami, who ‘worked in the Lands Bureau for ten years’ dutifully only to be retrenched thanks to an IMF inspired structural adjustment programme in the 1980s Gambia. Now the struggle of Erubami to keep head above water post retrenchment forms the bulk of the story. Here the critics have given in a very concise way, the entire gamut of the storyline.

An intriguing aspect of the storyline is the setting, which we are told is economic, political, spatial and temporal. Now, here the authors have done well by weaving the various shades of settings into a seamless yarn as is obvious in pages 14-16.

Another interesting expose by the authors is their treatment of the characters in the work. In my own critique of Nana’s works nearly two decades ago, I had said that he and Baba G Jallow are two Gambian authors obsessed with chronicling the lives of the marginal lives- those waifs just about to tip over into the ravine of social failure- the drunkards, pan handlers and seaside gents. Now It is possible to graduate from being a marginal live back into the centre of society, but it is really much easier to go the other way. The authors have ably defined the terms of all the literary devices such as personification p.40; apostrophe, page 41; pun page 43; etc. And they also draw widely from examples in the book. The teachers’ guide at the end of the book and the questions will optimize understanding and appreciation of the book Magic Calabash.

This is a very good book which is highly recommended as a supplementary school texts.