The head coach of the Gambia Senior National team, Paul Put who has recently signed a four year contract with The Gambia, could not hide his satisfaction following a magnificent performance by our darling U-17 in the ongoing African U-17 junior championship in Algiers.

Speaking to Pointsport on Monday, Coach Put said he was very much impressed with the performance of the team and expressed optimism that the U-17 can lift the trophy when they face the host in the final on Thursday.

He added that the Gambia U-17 is technically and tactically better than other teams in the tournament although he felt the team has a big gap to close before leaving for the U-17 world cup to be staged in in September.

'In my own tactical view, has an edge over all their opponents in the tournament but I still believe there is a lot of work to do before the world cup," added the Belgian coach'.

Paul Put highlighted the fact that there are a lot of individual talents on the U-17 which can make the difference at any time, but was quick to reveal that team work should also be put into consideration.

He advised the players to keep their feet on the ground and continue working as a team so that they can put their dreams on track.

He called on Gambians to continue working hand-in-glove so that the country's performance at the international level can always be satisfactory.

Paul Put also described this year's GFA division one league championship as interesting, and promised to scout some of the outstanding talents as part of his assignment to build a national home-based team that can represent The Gambia at regional and continental competitions.

It could be recalled that government has recently signed a four-year-extension to Paul Put's contract that will keep him with the squad until 2013.

Under the contract, Mr Put will continue to serve as the head coach of the senior national team.

He finally thanked the Government, the GFA, the Press, and Gambians for the trust and confidence bestowed on him, and promised to live up to the expectations of everyone. 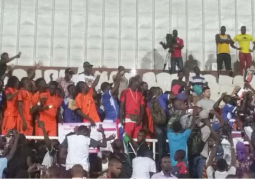