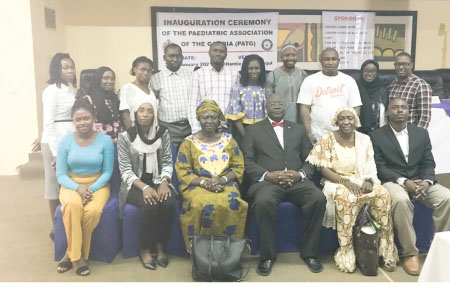 Paediatric Association of The Gambia (PATG) on Saturday launched to draw the attention of the Government and the people of The Gambia to a condition that constitutes a threat to the life and health of children.

The creation of the association will allow cooperation with national, regional and international bodies with similar interests. The launch which brought together health workers and stakeholders was held at a local hotel in Banjul.

One of the targets of the association is to promote friendship and understanding among Paediatricians and all other professionals dedicated to the development and promotion of good health of children in The Gambia.

Representing the Minister of Health and Social Welfare, Dr Mustapha Bittaye said the association will help to advocate the health and wellbeing of children, pregnant women and women in general.

He assured the association of government support as their responsibilities are known to the authorities, especially their advocacy for the welfare of health workers.

Rohey Malick Lowe, Mayor of Banjul said there is no greater national priority than health and education, especially when it comes to the needs of children, saying she believes that health is the most important tool for a better society to mitigate challenges and foster growth.

“In my capacity as the Mayor of Banjul, I have worked tirelessly with my team to advocate for capacity building in all sectors, especially the health sector and RVTH was not left behind and will still benefit from whatever comes on my desk,” she said.

According to her, this initiative is the art of caring for children from birth to adolescence with emphasis on their physical growth, mental, emotional and psycho-social development.

The Banjul Mayoress commended the initiative and expressed hope that when the plans of the association are implemented, they will significantly contribute to improving the health of children in the country and meet the targets of the SDGs in 2030.

Dr Adama Sallah, president of the Association said their objective is to promote the maintenance of appropriate child health practices among medical professionals and other health professionals in the country.

According to him, vital relationship of the mother’s health and wellbeing and development of the child should be recognized by all.

He noted that solutions to some of the major problems of maternal and child health are beyond their scope, adding that there is an increased need for advocacy which should be well cultivated in the profession.