Pa Suwareh Faye, the Assistant Director of Sports admitted that team spirit is one of the reasons behind Bakau's success for the past three years.

The technical adviser to the Bakau zonal team and the former Gambia national U-17 Coach watched Coach Abdoulie Bojang and his men progressed to the zonal final after beaten bitter rivals Banjul in the second edition of Baby Muhammed Jammeh Perpetual Cup Competition in controversial circumstances last Saturday and spoke to our reporter shortly after the game in this interview.

Pa Suwareh Faye who is a native of Bakau hailed the players and the technical staff of the team for demonstrating a high sense of maturity and exposure.

According to him, Bakau has got what it takes to retain the title in third successive years, considering the material at their disposal.

Bakau is no doubt the best zonal side because they have proven the best team of the campaign in the past two years which saw them clinching two straight zonal cup titles after twice beaten rivals Banjul in the finals.

This, Pa Suwareh Faye indicated, is a clear testimony to the fact that the defending champions has the players to repeat similar success when they meet fellow title contenders Serekunda-East in Sunday's final at the Independence Stadium.

The elated Pa Faye who doubles as the President of the Gambia Football Coaches Association is however aware of the fact that Bakau's fellow finalists Serekunda East, is a formidable side with a lot of big name players at their disposal. But he believed that Bakau can retain the title if they add up little bit of commitment which seems to be lacking in the team.

The secret behind Bakau's success is determination and the confident within the players but the only problem in the team is the fact that the players lack commitment which is very important in the team.

However, he said Coaches under the leadership of Abdoulie Bojang will work very hard to add little bit of commitment in the team in order to achieve their objective of winning their third consecutive titles in three years.

Pa further seized the opportunity to thank Abdoulie Bojang and his coaching staff for what he described as a tremendous job. 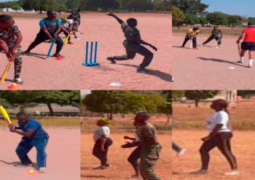 The Alkalolu and the Act