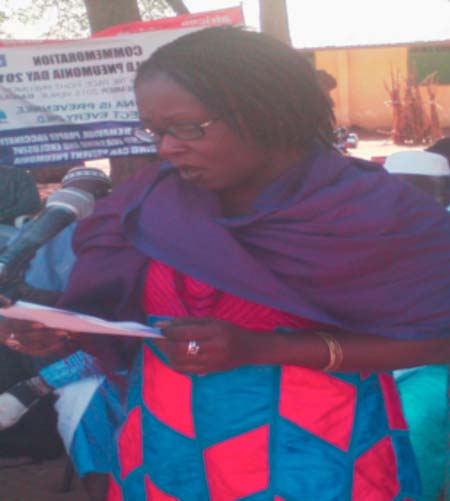 The permanent secretary at the Ministry of Health and Social Welfare, Safie Lowe Ceesay, has said globally more than 2,500 children under the age of five die of pneumonia every day, which is close to one million each year.

“This is nearly 1 in 6 of the total deaths in this age group, and most of these deaths are entirely preventable.”

She made the statement while delivering a speech at the commemoration of World Pneumonia Day, which is celebrated globally every year on November 12.

The local celebration held in Basse, URR, on 29 December 2015 was organised by the directorate of Health Promotion and Education in collaboration with UNICEF on the theme: “Push the pace, fight pneumonia.”

According to PS Ceesay, the day is commemorated each year to raise awareness on pneumonia, promote prevention and treatment, and generate action to fight the illness.

“Pneumonia is a form of acute respiratory infection that affects the lungs, making breathing painful and limiting oxygen intake. It affects children and families everywhere, but almost all deaths from pneumonia occur in poor or rural communities.

“It is the biggest killer disease of children under the age of 5 years worldwide,” she added.

“The aim of celebrating the day is to create public awareness about pneumonia that kills one child under the age of 5 every 20 seconds; to promote interventions for preventing and treating pneumonia; and to generate an action to combat pneumonia through active community participation.”

Mrs Ceesay said in The Gambia, according to the statistics of the health management information system of the Ministry of Health, 41,841 children under the age of 5 were diagnosed with pneumonia at the outpatient clinics in The Gambia between October 2014 and September 2015.

Out of this, 5,305 children were admitted at the inpatient clinic for severe pneumonia and 119 of these children later ended up dying, the Health ministry PS said.

She tasked the directorate of health promotion under the Ministry of Health and other partners in the area of child survival and development, to implement the promotion of affordable interventions and simple behaviours such as hand-washing with soap and clean running water, exclusive breastfeeding for newborn, proper infant and young child feeding practices.

In his remarks, the Governor of the Upper River Region (URR), Alhaji Omar Sompo Ceesay, thanked the directorate of Health Promotion for choosing his region as the centre for the celebration of this year’s World Pneumonia Day.

Governor Ceesay said the day was geared towards raising awareness on pneumonia prevention and treatment, as well as generating action to fight the burden of the illness.

Therefore, he added, pneumonia is a disease of public health concern and needs greater attention.

The regional health director for URR, Lamin Ceesay, said World Pneumonia Day is held on November 12 by bringing people together to raise awareness on the disease.

He recalled that the day was first hosted in 2009, when over 100 organisations joined to form the Global Coalition against Child Pneumonia.