All other protocols respected,

It is yet another very important day for the Gambia Press Union, the fifth congress. This is a time when members meet to take decisions in the interest of their union. The fact that in thirty years or so of the life of this union there has not come a time when congress is due it fails in its duties to hold one, is a clear manifestation that we at the Gambia Press Union valued the democratic principles. That the union and its members are not mere preachers but do what they preach. I thank you all for that bold achievements.

The GPU have managed to handle things in the past three years with much difficulty. When this GPU executive came to office, one of our major problems was the environment we found ourselves. It was not an ideal one for any genuine journalists to operate.

This was a time when our colleague Deyda Hydara Editor/publisher of the point newspaper was killed. That was coupled with some other arsenal attacks on the media and its persons. There were many arrests of journalists in connection to their work as journalists. That has led to the fleeing of some journalists and in other cases media houses and institutions were closed down. Some media laws were also in places which make the work of the journalists' one of a difficult one.

What this executive did was to go in for capacity building a major tool for us to operate. As indicated in the Secretary General's report. We then conducted training and workshops for members just to brush the talents of the general membership. This included the two election trainings.

Still in the quest to build the capacity of the membership, The Gambia Press Union was able to collaborate with Gambia Media Support (GAMES) a Danish international NGO to come with a 1.2million dalasi project on capacity building. This will be a two year project and is already in progress.

Where the GPU made not much progress, is the numerous cases of journalists being assaulted or have the houses closed down. Here the GPU could do very little without the full participation of members themselves. Like the GPU do not own any newspaper or media house as a result it cannot take any legal actions on any cases like the unlawful closure of media houses. It is they themselves who should take such actions. Like in the case of Citizen Fm, the late proprietor Babucarr Gaye took his case to court.

Another area that we did not achieve much is in the case of Deyda Hydara. Since the report was out, the GPU did express dissatisfaction about the report and urged government to involve external investigators if they feel the resource and manpower is not enough to handle the case. We at the GPU said we have seen it in some countries where governments for resource constraints do invite external assistance. However we were not able to convince government on that aspect.

The GPU was able to convene an international conference in December 2005 to raise more awareness on press freedom issues by commemorate the one year anniversary of the killing of Deyda. The same magnitude was planned for 2006, but we could not. I only hope the next GPU executive will be able to do the same for 2008. December 2008 will mark three years since Hydara was gunned down by unknown killers.

Colleagues, there is ample need for the union and government to dialogue in order to forge ahead. I can assure you that some efforts were made in that regard but it is still full of constraints. Government must see the GPU as genuine partners otherwise the dialogue will continue to suffer. There cannot be any meaningful dialogue without going through our line ministry.

The Gambia Press Union is a non profit making organization and as a result it is not in any business. How ever we derive our income from membership dues, which is ten dalasi a month. Looking around this room how many of us are here? If we all pay our dues regularly how much money is that? However regular pay of dues is not the case and yet the union has survive.

We have a regular staff of three to maintain. We have to pay our rent which thirty six thousand dalasi (D36, 000.00). This is what we are supposed to do to stay where we are. It was not easy at all. In some instances we have to go begging to get this obligations met.

The current executive saw the need to come up with an income generating project that should be able to take care of some of our over head cost. Like salaries, telephone bills, electricity bills, and office rent.

A printing press was purchased with the assistance of the US embassy sometimes in 2006.

In November 2007, the machine was moved to Today newspaper when the need was no longer at point, for one hundred thousand dalasi per annum. The agreement is that Today newspaper pay the GPU

The GPU raised a total of D100, 000.00 in 2005, after founding Deyda Hydara Foundation Fund. The creation of this fund was a joint effort of the Civil Society /GPU coalition. A committee is set up to register the foundation and then a board be formed. Until the board take over the affairs of the fund it is given to the GPU for save keeping. That money is in our accounts waiting for handing over to a constituted board.

In the shortest period our membership fee rose to D22, 080.00 in anticipation of the congress.

The GPU last year step in and pay a fine of D50, 000.00 for Lamin Fatty a member, who was convicted at the kanifing magistrate courts. Fatty was charged with false publications.

The GPU is able to high the services of a Project Coordinator and an Administrator the services of AAC & Co an accounting firm is hired for auditing the accounts of the GPU.

Finally Mr. Chairman, I once again thank you all for your commitment to the union and urge all of you to continue the same for the next three years.

At this point I am please to announce that after serving as Vice President in the former executive for three years, and as an elected President in the current executive, even though I have the constitutional, mandate to run for a second term, I am not offering myself for the coming election.I am voluntarily stepping down give way to other potential candidates for the next GPU Presidency.

THANK YOU ALLAND WISH YOU A SUCCESSFUL CONGRESS

A Happy and Holy Tamxarit 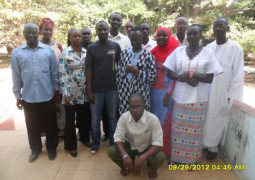