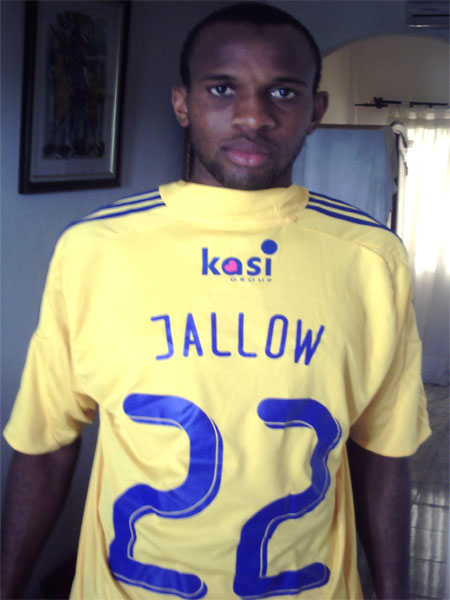 Gambian star striker, and former Wallidan and Alalin football clubs in The Gambia and Saudi Arabia, Ousman Jallow has express his happiness after his recent  move from Saudi Arabian giants Alalin Football Club to join  the Danish  first division club Brondy FC on a three-year contract.

He added, "You play many games and a lot of scouts will be watching you playing and Bromby are a very big team in and and are currently playing in the European cup. It is a good club for me and I am very happy to be at the club."  He said that he could have made his debut against Copenhagan FC before coming to The Gambia, but "due to negotiations between the two clubs towards finalising the deal I will not make it for that game." According to Ousman Jallow, the Danish giants spotted him during the preseason in . "We had our preseason in and we were playing with a German first division team. The President and the coach of Bromby FC were watching me without my knowledge. But I was later told in by the President."

He further explained, "it was very tough for the two parties to come to terms because the team did not want me to leave so I finally signed on Saturday and my residents permit was not ready for me to play for the team on Sunday."

Asked about his impressions on the upcoming game against , Ousman expressed optimism that by the help of God The Gambia will win. "The game is a very important game for all of us because it is a must win game. All we need is the support of all Gambians and by the help of God we will win," he stated.