Our good moral will continue to shine-out going head girl

Dacosta commended their teachers, parents and MoBSE for making it possible for them to complete their nursery three and grade six circles at Advance School.

In her speech to the grandaunts, the headmistress of the school Mrs. Mbayang Jobe said in October 2005 Advance Lower Basic School was opened with an enrolment of 10 students.

She also highlighted some of the activities carried out in the school in 2009-2010 academic year, noting that the nursery school has an enrolment of 129 students, while the Lower Basic school has 142 students. She said their new training centre was opened for students who had completed grade six, nine, twelve or adults who are interested to further their education.

Certificates were presented to students and teachers for their hard work and dedication to the development of the school. 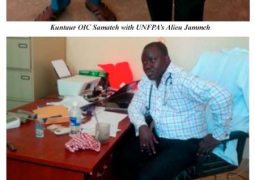 SHE SHE SHE: UNFPA ‘a genuine partner’, say beneficiaries