With firmness of mind to lead a purposeful musical career, Gambian female mbalax vocalist, Oumie Ngum (Maisser) has poised to take the music buying public by storm by releasing six singles entitled: Yaayboye as the latest and is sponsored by Gamcel.

Speaking in an exclusive chat with Entertainment recently at her residence in Manjai, the young Gambian female Mbalax star revealed that since she started music, she was able to released six singles. She however noted that she is yet to release any album. But in her own words, "music is something that needs patience."  Maisser called on musicians to upgrade themselves in the profession and work hard so that they can become befitting musicians in the society. 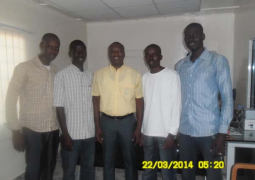