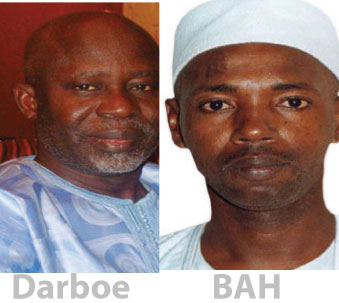 The leaders of opposition parties in the country have been reacting to comments made by President Yahya Jammeh, who recently declared that by the middle of next month (September 2012), all death sentences would have been carried out to the letter.

While Ousainou Darboe, leader of the United Democratic Party described the declaration as “unfortunate”, the opposition Gambia Moral Congress on the other hand said with the majority of those on death-row being convicted of crimes of a political nature, it would be an irreversibly fatal travesty to put those people to death.

In an address to the nation to mark the Muslim holy feast of Eid-al-Fitr, Jammeh said by the middle of next month, all the death sentences would have been carried out to the letter, though he did not give the exact figure of those currently on death row.

“I think it is a very unfortunate statement coming from the President. One would have expected that on such an occasion like this, the President will be demonstrating mercy and forgiveness,” Darboe told The Point in an interview.

According to the UDP leader, nobody condones murder and nobody should condone it, but for the President to say that he will implement the death penalty to curb the rate of crime in this country is “incorrect”.

In his view, no amount of execution can curb the rate of crime in this country.

“It is true that laws must be implemented, but it is equally true that the APRC government is not observing some of its obligations under the Constitution,” he said, adding that the whole issue of executing murder convicts is not a good way of ending our fasting in the holy month.

On what Jammeh said about the Markas, Darboe said this was also “very unfortunate”.

“One would have expected the President to be choosing in the words he uses,” he stated, adding that this shows that “there is something fundamentally lacking in the quality of leadership in the country”.

“For me, it is a great embarrassment that the President will go on TV and use such words like cutting people’s tails. You do not rule a country by means of threats, but by convincing people to accept your actions on certain issues,” Darboe remarked.

He ended his remarks by wishing all Gambians a happy Eid and prayed to God to accept our prayers during the holy month of Ramadan.

In a statement issued yesterday, the GMC also said it welcomed the President’s call for a crime-free society in The Gambia.

However, it said, “We strongly urge the Gambia Government to reverse its dangerous intention with immediate effect. On the death penalty, our policy position is fundamentally at variance with the APRC. “GMC is fiercely opposed to the death penalty in The Gambia, particularly under prevailing political and judicial circumstances.”

According to its statement, the GMC believes that “we can realistically reduce crime, including violent crimes without killing a single soul.

“First, a sustainable policy to that effect, a professional security establishment, and a strong commitment backed by the required resources must exist. A GMC government shall abolish the death penalty within our first 100 days in power,” the GMC further stated.

The GMC said what Gambians anticipated from the government was to tell us its policy prescriptions for tackling crime.

“What we got from the President was a narrative, lacking in policy substance, while failing to state his government’s plans on how he intends to create a crime-free society. A narrative without a realistic and sound policy foundation is a non starter.

“Government has never conducted a study into the factors behind the increase in crime rate. They cannot tell you why crime is up, because they don’t know. You cannot control crime without dealing with its underlying causes,” the statement added.

It noted that there is no statistical evidence anywhere in the world, including in The Gambia, attributing decline in crime rate exclusively to implementation of the death penalty.

Unfortunately, the GMC went on, for the past eighteen years, crime statistics have been non-existent in The Gambia to show government’s sincerity on the issue.

It called for law enforcement agencies, particularly the police to be provided with the right professional training, tools and resources to combat crime, noting that for now, the budgetary allocation to the entire Police Force is far inadequate to seriously tackle crime even for one region of the country.

Incontestable evidence around the world, it further said, including The Gambia has proven that miscarriages of justice or wrong convictions do occur.

“The Gambia should not even consider the death penalty without first building strong state institutions, effective judicial and criminal justice systems properly insulated against the slightest political interference and financial incentives,” GMC stated.

Also reacting to Jammeh’s comments was Hamat Bah, leader of the opposition National Reconciliation Party (NRP), who said the death penalty is legal in The Gambia because it still in the Constitution.

According to him, since independence, The Gambia has witnessed only one official execution, which was the execution of one Danso of the then Gambia Field Force for killing one Commander Mahoney in 1981.

“After the 1981 abortive coup in which he participated, his death sentence was carried out in accordance with the law. That was the only known official execution I know of since independence,” Bah added.

However, he went on, “Gambians have witnessed many death sentences being passed by our courts in the second Republic, but are yet to hear of any official execution of any of these sentences imposed on convicts.

As far as he is concerned, Bah went on, he is not aware of any time when the National Assembly performed this function.

This, Bah added, is the legal basis under which the President can grants mercy to people.

In his view, the only option we have for now is for the convicts is to appeal to President Jammeh to show them mercy, as he has demonstrated since he came to power regarding the death penalty.

“While we share some of his concerns, particularly on some of the unnecessary killings, I think we should engage more in educating people on how we can live together and co-exist. This is so because there are some negative aspects of the death penalty.

“We have seen situations in other countries where people are executed only to see later that there was a miscarriage of justice,” he said, adding that President Jammeh should give a chance to see if there will be any improvement in that direction.