The 2008 Olympic day run organised to commemorate the founding of the modern Olympic Movement under the auspices of the International Olympic Committee will be celebrated in The Gambia on Saturday 21stof June 2008.

Schools in the Greater Banjul Area with a total of over 1000 participants areexpected to take part in the different races in this years run.

The races to be competed includes, 3KM for primary schools, 5 KM for Upper Basic Schools and 10 KM for senior secondary schools and open athletes.

The race will end at Gambega gates were all participants are expected to report at by 8.00am for the start of the event.

A similar race will be done in Janjanbureh and Mansakonko.

Previous:
Olympic Day Run Saturday
Next:
Make Violence a Thing of The Past! 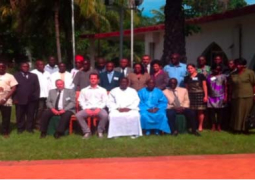