Dr. Isatou Touray is 'News and Report 'Gambian of the Year 2008'

Dr. Isatou Touray (PhD), Executive Director of The Gambia Committee on Traditional Practices Affecting the Health of Women and Children (GAMCOTRAP), has been designated "Gambian of the Year 2008" by the Gambia News and Report weekly magazine, the third woman to be so designated after Vice President Dr. Isatou Njie Saidy and educationist Mrs. Harriet Ndow. In a letter conveying the news to Dr. Touray, Mr. Swaebou Conateh of the Dippakunda basedGambia Communication Agency and Baroueli Enterprises, the publishers of 'The News and Report" weekly, states that her selection was because of the way she has courageously accepted, with great commitment, dedication and tenacity, to serve as the main driving force behind the espousal and pursuit of a worthy cause, namely the campaign for gender equality and against traditional practices affecting the health of thousands of our women and children in a socio-cultural context that still distances itself from any serious public discussions of or open involvement with such well rooted sensitive taboos and traditional practices,.

Unabashedly and resolutely taken front on, and with remarkable success, thefight to "Drop the Knife" for female circumscision and, using irrefutable proof" conducted with tact, sensitivity, perseverance and due regard, this anti-FGM campaign with over 40 communities and groups in The Gambia and beyond - to include Gambian, Senegalese, Malian and Mauritanian communities in Europe, a measure which has saved many girl children from the iIl-effects of FGM thus improving the maternal and child mortality rates of Gambia's health index.

GAMCOTRAP have persuaded religious leaders and convinced community elders, women's groups and women circumcisers themselves to join and support the "Drop the Knife" campaign,

the management of 'The Gambia News and Report" is satisfied that she has met the following criteria for selecting "Gambian of the Year" (Man of the Year for males):-

1). The person selected must be someone who, through his/her work, profession or personal endeavour, is judged to have contributed the most to the public welfare and to advancing the country's development in the interest of all Gambians.

2). He or she must have contributed significantly in enhancing in a direct and tangible form the social and economic status of Gambians as a whole.

3). He or she would have put in place for Posterity facilities and or infrastructures and other achievements that can serve as a lasting memorial of his/her contributions to national development.

l). Risen to the top of your educational career with a PHD in development studies (gender issues) from the University of Sussex in the UK. and in the teachingfield by your promotion to the position of Deputy Director

General of the Management Development Institute (MDl) where you head the Gender Studies Programme after founding the Gender and Development Department there.

2) Attained your present position as the Executive Director of The Gambia Committee on Traditional Practices Affecting the Health of Women and Children (GAMCOTRAP) and for a second term, the position of Secretary General of the Inter-African Committee on Traditional Practices. Advocay work through GAMCOTRAP has also resulted in the Gambia's signing and ratification of the Child Rights Convention (CRC), the Convention on the Elimination of all forms of Discrimination Against Women (CEDAW), The African Protocol on the Rights of Women in Africa and your continued advocacy for passing into law the Women's Bill and for a law to ban FGM.

3) As a Senior Consultant at MDI, carried out various consultancies here and overseas notably for UNESCO, World Bank and UNDP

4) Belonged to many bodies for example, the Gender Action Team for the Ratification of the African Protocol on Women's Rights, the International Advisory Board of the Global Majority, USA, and the Technical Advisory Body for the Policy for the Advancement of Gambian Women.

5) Become a widely published scholar - apart from your PhD thesis on gender and environment in a Gambian community, you have written poetry like the poem on FGM (Lamentations of a Victim) and published research work such as "Women in Top Management in The Gambia".

6) In 2008, in recognition of your achievements, the US government awarded you the Ambassador's Prize for "International Woman of Courage" for "initiatives effecting change for people in their various communities," based on the work you do at GAMCOTRAP" which is grounded in grassroots activism working with communities in trying to understand issues inimical to their health and well being."

The letter added that, "In view of the fact that:

1. Your case also illustrates possibilities for individual citizens who care enough about their country and points to the importance of individual strength of character and high principles.

2. You have shown, by your conduct and example, a high level of personal sacrifice, scholarly discipline, management and other skills,

3. By so doing, you have reserved to yourself the high regard and admiration which won to your side the unreserved applause of many Gambians. "And since we believe that, like some other prominent leaders of the past, your story will remain for Gambians an important example of good leadership, to serve as a point of reference in terms of service to the nation" we take this opportunity to salute you for what you have been able to achieve in the annals of our country's history. We know your courage, sacrifice, steadfastness and highly commendable contribution are bound to remain a source of inspiration and exemplary conduct to our citizens now and generations unborn. "The management of ' 'The Gambia News And Report" weekly magazine being thus satisfied that you have met the requirements to be designated the magazine's "Gambian of the Year 2008," now congratulate you most heartily on your selection and designation. Congratulations on your well merited recognition." 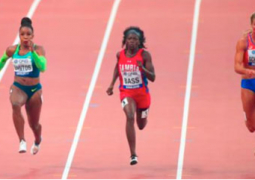