Pa Baboucarr Barrow, the Head Coach of Brikama who was satisfied with the performance of his boys, said he was not disappointed with the win looking at the young and inexperienced players in his team, compared to their opponents.

"Though the league is still young, I believe the team can come back to it winning form having learnt a lot from the games we lost," he stated.

The coach of the  Brikama side, who lost three games in a row, said the results does not mean that it's the end, as he is sure that his team would top the league at the end.

Barrow also warned other teams not to see them as underdogs.

He said that his team did not have the required technical and financial supports, compared to other teams. He said their sports committee is only concentrating on football and not other sporting disciplines.

He added that their team deserves much respect, adding that his players are doing very well and hope they will maintain their winning spirit.

The Olympafrica Centre/ Serrekunda East side is preparing well for their next game against Interior Male Volleyball team, which is expected to be keenly competed. 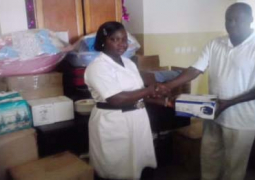