Ocean Bay Hotel was recently dragged to the Industrial Tribunal at the Kanifing Magistrates’ Court by one Mama Cham Deen, a plaintiff claiming she was wrongfully dismissed.

Mama also claimed the sum of D250,000 being damages for breach of contract and cost as well as interest of 25% to be awarded to her.

According to the particulars of the claim by the plaintiff, she was an employee of the defendant since 15 June 2004 but was wrongfully dismissed on 27 June 2011 without a dismissal letter and salary for the month of June.

She told the court she was dismissed because someone accused her of finding some eggs and sugar in her drawer in her absence.

The particulars of the claim further stated that the plaintiff’s drawer was never locked and was always opened, and everyone had access to it.

The plaintiff claimed in the particulars that the person who accused her did not have any proof for the accusation neither was she seen by the accuser putting those items in the drawer.

However, when the case was mentioned, defence counsel A. Njie told the tribunal they had been briefed and that they would be filing their defence.

The case, presided over by the chairman of the tribunal, Ngube, was adjourned till 26 July 2011. 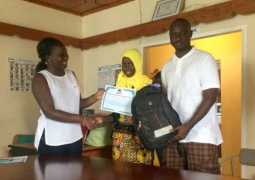