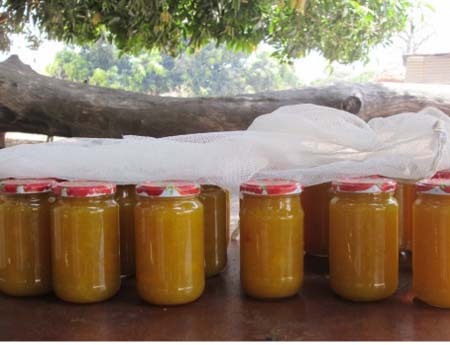 This was part of a project on post-harvest, rice production, equipment and mango preservation skills transfer for women of Nyofelleh Village in the North Bank Region.

The project was won in 2013 by Lamin O. Ceesay, a Gambian student together with one Juan David Rivera Acevcedo, a Colombian at Willy Brandt School of Public Policy, University of Erfurt, Germany, on behalf of the women of Nyofelleh.

The project was funded by Engagement Stiftung and Willy Brandt School of Public Policy, University of Erfurt, Germany.

As part of the training activities, Lamin O. Ceesay and Nyofelleh Village project management team paid a courtesy call on the district chief, Momodou Chatty Cham, to brief him on the project implementation and to request for his support in ensuring that the rice milling machine previously donated to Nyofelleh village by the same donors is properly managed for posterity.

According to Mr Ceesay, the training of women on how to process and preserve mango was the second phase of a bigger project of which phase one (the purchase of a rice milling machine) was implemented on 4 March 2014.

For his part, Chief Cham assured Mr Ceesay and his team of his office´s unflinching support to ensure all donated projects within his district are properly managed and not personalized. He promised to regularly check on how the project was faring and expressed his office´s appreciation for the support of the German people.

Chief Cham thanked the Engagement Stiftung, Willy Brandt School of Public Policy and the facilitator, Lamin O. Ceesay, and Juan David Rivera Acevcedo for the laudable gesture.He said the training was timely and would add value to the tones of mangos that were wasted in and around his district each year.

“I wish that all villages in my district could benefit from such a value-added project and by extension the whole Gambia, as each year tones of mangoes are perished in The Gambia,” he said.

Although the project was designed for women of Nyofelleh, the participants to the training comprised men and women drawn from Maliknana and Killah Jurunku villages as well. The trainees were taken through the theory and various practical stages of how to process and preserve mango into Mango jam and mango chutney. At the end of the training, sheets of paper with the list of ingredients were distributed among the trainees to serve as a guide for trainees when they want to demonstrate their skills.An oral exam was also conducted by the trainer to test the understanding of the participants regarding the processes, ingredients, quantity and the measurement.

In a show of appreciation, the women of Nyofelleh and the representatives from other villages joined together and composed a song for the facilitators and trainer.

The trainer was presented with vegetable gifs of various kinds.