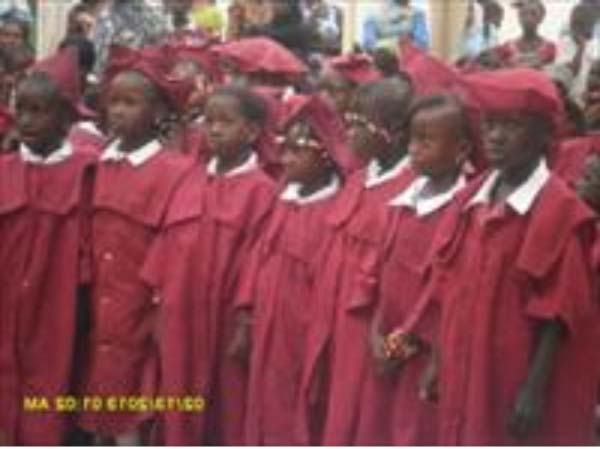 Nyodema Nursery School recently held a prize-giving ceremony for their outgoing pupils, at the school grounds in Manjai Kunda.

Speaking at the ceremony, the headmistress of the school, Madam Mariama Secka Darboe, said her school’s enrollment this year is 205 out of which 113 are girls and 92 boys.

Fifty-three are going to the different nearby lower basic schools in September this year and 53 children are sponsored by the Belgian organization while 15 pupils are in the waiting list for sponsorship by the Belgian friends next academic year.

Madam Secka further stated that they have tried together with their sponsors to help the children with all materials needed for their education and the school is also benefiting from the best Educational Materials every November as well as families in respect of extra feeding.

Madam Secka-Darboe thanked the government and the regional office for giving Nyodema Nursery School an approval to continue operation as a Lower Basic school.

For his part, Pa Amat Secka, guest speaker at the ceremony, said Nyodema Nursery School was established in 1987 when there was only one classroom and a parlor, which were rented for class one & two only.

He said that during the 3rd year there was no classroom, but under a tree with no facilities like permanent structures, water, electricity or good toilets.

Secka said that as pupils they are supposed to be the leaders of tomorrow and as such they are expected to respect their teachers and others at all times thus as students they should develop positive attitude that society values since they are expected to serve the community in which they live.

He added that every child has to accept what society values, such as norm and values of society, noting that as children they are expected to behave well at community level where their parents, religious leaders, Alkalos, political leaders live.

Secka also said that a discipline and respectful child is often said to be a lucky child, hence he urged the children to be respectful, hardworking and to develop self discipline at all times