Drug trafficking is not just a crime; properly perceived, it has to be one of the most damaging activities to individuals, society, and to national development.

What it encourages and propagates is a growing addiction to drug abuse.

According to some health experts, drug abuse can be defined as “the use of a drug to the point where the user’s health is affected, or where it becomes difficult for the user to live a responsible life.”

Two significant points immediately come to mind. First, someone’s health is affected, and by that is meant adversely affected.

In the event of addiction the sufferer becomes prone to illness of body or mind, and sometimes both.

It is his or her family, friends, and society who carry the burden, providing medical expenses and financial and psychological support.

We have seen how some drug users, being so much addicted, go around stealing on flogging off valuable items in order to purchase drugs that they could not do without.

We have seen in our society today how drug abuse has reduced many decent, sometimes brilliant and capable individuals, to mere ragamuffins, and to destitution.

We have seen careers destroyed by it. Where does this leave the individual, his family, and the nation?

Second, the user may have difficulty living a responsible life. He or she may become a ‘junkie’, and lose all zeal to be a productive person in society.

Where does it leave national development if a growing percentage grows because the user attracts more users.

The message, we are sure, is loud and clear.

Drug abuse harms individuals, distresses families, and regresses society. Surely what could be useful is concerted effort by parents, schools, and society to help keep young people from starting on drugs.

But, most importantly, those who make the drugs available should be made to meet the full force of the law. All they do is to gain quick wealth and to deal out slow death.

No greater disservice can one commit against his nation and to mankind when engaged in drug trafficking.

“Crime is naught but misdirected energy”. 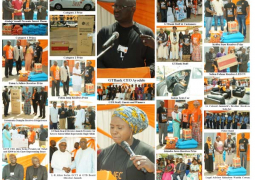 GTBank gives out car, other valuables to winners of ‘Save and Win’ Promo