One Kissama Conteh was recently arraigned before Magistrate Jallow of the Kanifing Magistrates’ Court, charged with criminal trespass and threatening violence.

He denied the charge and was granted court bail of D30,000 with two Gambian sureties, who must deposit their ID cards and also swear to an affidavit of means.

Hearing was adjourned until 11 February 2016.

The charge sheet in count one stated that on 4 February 2016, at Pipeline in the Kanifing Municipality, he unlawfully entered the premises of the Gambia Bankers’ Association where he intimidated, insulted and annoyed the workers.

He was also accused of threatening to cause grievous harm to the workers with a knife, on the same date and place. 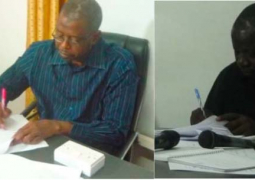