There is uncertainty surrounding the fate of The Gambia national U-17 team's proposed international training camp in the , if the words of the GFA boss Seedy Kinteh are anything to go by.

According to him, the GFA is still struggling to require the needed fund to help the Baby Scorpions in their overseas camp, slated for September 17th 2009.

"We are absolutely running against time because the date that is being set for the U.K training camp is just at the corner and the donations are not forthcoming as expected," said the GFA prexy.

Seedy who was speaking to our reporter, Lamin Drammeh in this interview in his office at the Independence Stadium on Thursday further disclosed that plans are also underway for the FA to lift as many as 40 players from The Gambia national U-17 team for the much-talked about MRI test that continued to dominate the headlines on both the national and international media across the world.

"We need the money in order to undergo the MRI test for the Baby Scorpions which will be conducted in any moment from now but we are still yet to raise the required fund for the test," he said.

Seedy urged all and sundry to emulate Gamtel\Gamcell that recently came up with a huge amount of D3.5 million as part of their pledges towards the national U-17 team's preparation ahead of the U.K training camp.

The GFA President was, however, quick to add that the money at their disposal is not enough for the U.K training camp. As a result, he called on others to make their own pledges to ensure the successful participation of the Darling U-17 team in the world football mega show down.

The is paired in group C, alongside , and Netherland in the October World Cup, scheduled to take place in the Federal Republic of Nigeria. 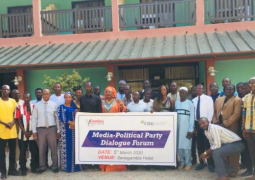