FIFA vice-president Jack Warner has announced that organisers are yet to detect any player who is above the allowed age at this year's Under-17 World Cup in Nigeria, says goal.com

An MRI scan was introduced at this year's competition to fish out age cheats, but Warner disclosed at a press briefing in Abuja that thus far no negative report has been turned in from the random testing conducted on teams at the tournament.
"There is no negative report so far. As soon as other reports are available, we shall release them," Warner said.

The FIFA chief also commended the general organisation of the tournament.

"I am very happy at this stage of this competition. (There have been) no major problems as such," Warner remarked.

I must commend the workers at the Abuja, Calabar and Enugu. I have read some negative comments in the local media. The fact is that rain is an act of God. In England and other countries, they have similar weather disruptions.

"In Abuja, for instance, when the rain fell, we were told in 30 minutes play can resume and it happened like that, the same thing in Calabar and Enugu." 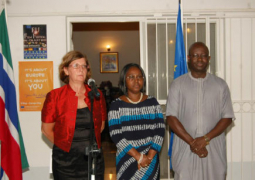 ‘Be careful not to elect dumb or selfish parliamentarians’