The game is scheduled to take place on 27 December 2015 at the Serrekunda East mini-stadium.

According to her, the Nda Mariam Jagne Foundation is currently supporting the Brikama and Faji Kunda health centres, saying the foundation had helped to renovate the Maternity Ward at the Brikama Health Centre.

She also called on the general public to come out in their numbers to watch the game as proceeds from the match will be ploughed back to the socio-development of the country, particularly the health sector.

The head coach Pa Saikou Tambedou said Sankum FC are highly motivated to play the game, as the proceeds willbe going back to the development of the health sector.

“It is all about national development and we want [Sankum] to be seen contributing to that aspect,” Tambedou said.

The Nda Mariam Jagne Family Foundation was launched on 21 December 2012 by the then vice chairman of the then Gambia Football Association (GFA) Normalization Committee, Alhagie Omar Sey at a local hotel in Kololi.

Speaking at the launching, Mariam Njie-Jagne, wife of Pa Modou Jagne, said the foundation is a registered charity whose main focus is to help and complement government’s efforts at reducing the rate of maternal mortality.

According to Mrs Jagne, Pa Modou Jagne has had personal experience of losing his mother to maternal mortality, which actually made them to focus on maternal health issues. 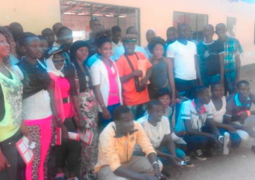