The two-week long female football tournament final will be played today at the KG5 Football field in .

In an interview with Pointsports yesterday the coordinator of the school tournament, Coach Kebba Njie, said out of the eight schools that were participating in the competition only and that made it to the finals. He said that the annual tournament is geared towards promoting female football in the schools.

He stated that the tournament is exclusively sponsored by Nitelife International based in .

He also commended Joseph Decka and Demba for their support. 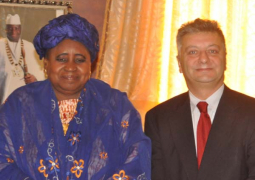