Penthalon is an Olympic sport comprises multiple disciplines including swimming, marathon race, fencing and shooting among others.

Some twenty-six athletes were drawn from NISA member institutions to take part in the championship, which was also attended by Benin, Guinea Conakry, Mali and host Senegal. Nigeria could not attend this edition.

Introducing the occasion at the GRTS Television House, Kanifing, Saikou B. Jarju, Secretary General of NISA, commended the Gambian government, especially President Yahya Jammeh for his support and recognition of the work of NISA, which organizes sports among workers in the country.

He also strongly appreciated those companies that responded positively and provided athletes for the championship before thanking the athletes themselves for representing The Gambia in a successful fashion.

“We went to Dakar to learn but came out with medals showing the versatility of our athletes who learned fast to adapt and participate to their best level,’’ he said.

Flanked by his officials, Mr Jarju then conveyed NISA’s intention to continue to guide and provide sporting opportunities for Gambian workers.

The following people were decorated for their outstanding performance in the championship winning the medals pinned on them: 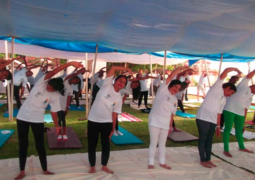