Amos Uchechukwu, a Nigerian national, was yesterday convicted by the Special Criminal Court in Banjul, after being found liable for causing a loss to Gamtel/Gamcel.

Amos Uchechukwu was also ordered to pay the sum of D43,143.78 to Gamtel/Gamcel, in default he would consecutively serve another three years in prison with hard labour.

Meanwhile, the court acquitted and discharged Ifeanyi Nwachukwu Ifesinachi, and Irabor Blessing, on all the counts preferred against them.

This was contained in a judgment delivered yesterday by the presiding judge, Justice Emmanuel Nkea.

Justice Nkea stated that by the information dated and filed on 4 March 2013, the accused persons were jointly charged with the offences of conspiracy and economic crime.

It has been alleged by the prosecution that some time in 2012, the accused persons conspired and then caused loss to Gamcel in the sum of D43,143.78 by illegally diverting Africel international calls without routing same through the international gateway.

He said challenged by the plea of the accused persons, the prosecution relied on the evidence of 8 witnesses and tendered exhibits in support of their case.

The 1st and 3rd accused persons each gave sworn evidence in their defence, while the 2nd accused person rested his case on the case of the prosecution, he said.

He said this was a very brief, simple and straight forward case. The facts are that some time in October 2012, officials of Africell noticed a suspicious pattern on some Africell SIM cards and immediately suspected a case of SIM box fraud.

It was later confirmed that the SIM cards were used in a way that bypassed the international gateway, so that calls placed on and through these numbers were not registered on the international network of Africell and Gamcel, he stated.

Justice Nkea added that the nine suspected Africell SIM card numbers were registered in the names of the three accused persons.

The accused persons were all arrested and statements was recorded from them by the police, and during the investigation it was discovered by the police that the SIM cards registered in the name of the 2nd accused were bought at the request and instruction of the 1st accused, Amos Uchechukwu, said the judge.

The ID card of the 3rd accused, Irabor Blessing, was fraudulently taken away from her restaurant by one Sunny, a friend to the 1st accused, with whom they frequently visited the 3rd accused persons’s restaurant at Sukuta, he added.

The trial judge said that the prosecution relied both on circumstantial evidence, and extra judicial statements of the accused persons, to prove the offence charged.

He added that upon the totality of the evidence adduced in this case, there was nothing that contradicted this finding by the police.

“The evidence adduced by the prosecution only sought to complement this finding. I therefore find as a fact that the ID card of the 3rd accused was stolen from her restaurant to buy and register one of the SIM cards that was used in perpetrating this fraud in her name,” the judge said.

He stated that apart from the fact that one of the SIM cards was fraudulently registered in her name, there was no evidence of her participation, either in the planning or the execution of this fraud.

He said that for the 1st accused, there was strong and unchallenged circumstantial evidence that this person participated in the commission of the offence.

“While there is no direct evidence of how and when the 1st accused met with Sunny and Bright to plan the joint execution of this criminal activity,” he said he was satisfied that he tricked the 2nd accused the way he did, and conspired with Sunny to steal the ID card of the 3rd accused to buy and register the SIM card.

Justice Nkea added that these circumstances present a complete and unbroken chain of evidence, from which a coordinated effort could be readily inferred.

“It is for this reason that I reached the conclusion that the 1st accused person together with Bright and Sunny had the common intention to execute the joint criminal enterprises,” he stated.

He said he was satisfied that the prosecution had proven his case beyond all reasonable doubt in both counts against the 1st accused.

In the same vein, he found as a fact that the prosecution had failed to prove its case with certainty required by the law against the 2nd and 3rd accused person, and they were accordingly acquitted and discharged. 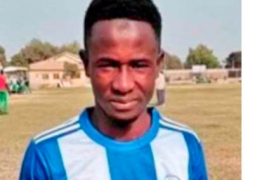