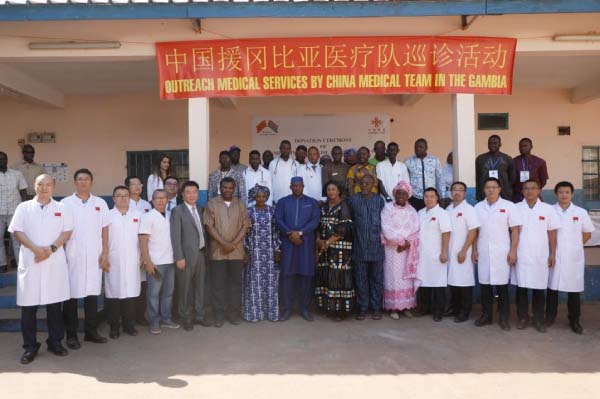 Basse, Upper River Region, 25 November 2019 - The Basse annex of The Gambia College that President Barrow commissioned last year is near completion and will begin operations in January 2020.

Local authorities led by the principal of The Gambia College told the president that the first batch of students that will be housed at the State of the Art facilities have already been enrolled.

The college will provide students, especially those in the Upper River Region and its environs, access to college education without having to migrate to the urban areas. The decentralisation of development and social services will minimize rural-urban drift, thereby easing pressure on social services in the Greater Banjul Areas

Meanwhile, President Barrow also made a brief stop at Basse Health Center to preside over the donation of medical items, equipment, and other consumables worth D700k from the People’s Republic of China.

The visit to Basse hospital also gave the President an opportunity to see firsthand the impact of the free medical services being rendered by the Chinese Medical Team. Led by the Chinese ambassador to The Gambia, His Excellency Ma Jianchun, the team briefed the president that they conduct periodic medical excursions to other catchment areas beyond Basse.