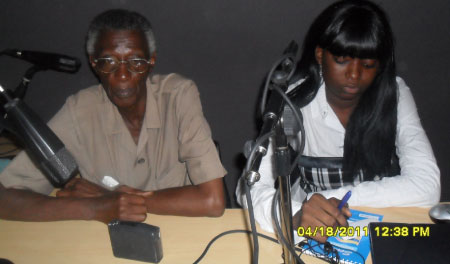 The Kora FM, which is situated at No. 10 Kanifing South, is managed by Ebrima Sagnia, the general manager.

In his launching speech at the launch, GM Sagnia thanked, on behalf of the proprietors of the radio station, Roger Barkurin and wife Mrs Barkurin for participating in the event.

“The proprietors and staff of Kora FM have the pleasure of introducing the Kora FM station to the Gambian listeners as the latest addition to the growing crop of private broadcast organisations in the country,” he said.

He added that the FM station, with its state-of-the-art equipment and a powerful 500-watt transmitter, will endeavour to provide quality, educative and interesting programmes for its audience.

He said that over the 24 days they have been carrying out test transmissions of music they have been receiving unaccountable numbers of calls from their esteemed listeners and fans from various parts of the country congratulating them for the station and its airwaves.

“Like other private FM radio stations operating in the country presently, mostly in Greater Banjul Area, but in some rural communities as well, Kora FM will rely on commercial advertisements and corporate sponsorships to bring services to the Gambian listeners” Mr Sagnia said.

The broad vision and agenda the proprietors of Kora FM have set for themselves, he said, would naturally evolve over the period. “We can already assure our prospective listeners and collaborators that Kora FM will be like no other radio stations in The Gambia.”

For her part, the programme coordinator of Kora FM radio, Maimuna Sowe, said Kora FM has added to the range of radio stations in the country.

She said their target is basically the elderly and the youth. For the elders Kora radio FM wants to reflect their minds to the past called “FATELLIGU DEMBA” because they are the people who can pave the way for the youths to follow.

“For youths, Kora FM wants them to be on the right path whereas if they listen to their elders they will know where they coming from and where they are supposed to go,” she noted.

Ms Maimuna Sowe revealed that they had recruited some staff and urged her newly recruited staff to be more professional “when it comes to programme presentation”.

Muhammed Sissoho and Lamin Gaye, both staff of the FM station, promised to deliver to the expectations of the management of the radio station.

Bai Sainey Secka, who supported the proprietors in making sure Kora FM was established, gave a brief genesis of the setting up of the station.