Neuchatel Xamax’s influential midfielder Abdourahman Dampha has poured cool water on the persistent rumours suggesting he had refused to play for the national U-20 team.

The former Gambia Ports Authority skilful player, who moved to the top-tier club Neuchatel Xamax last season, has never played for the U-20 team since moving to last year, despite receiving invitations from the GFA to steer for the team.

This has sparked speculations around town, with some people accusing the youngster of not honouring the call of the land of his birth.

But Dampha, widely known as Del Piero, has had the chance to explain the reason why he was not coming to join the U-20 team for the qualifying campaign.

“I was not being given permission by my club’s sporting director to come and play for my country because those invitations were always coming at a crucial stage of the season,” Dampha, who is part of the Paul Put team preparing for the upcoming Olympics Games qualifiers, told our reporter at the Brikama Mini-stadium yesterday afternoon.

“Those were crucial times of the season and I am one of the key figures in the team; that is why the club was reluctant to let me go,” Dampha added.

He further expressed interest in playing for the U-20 team and said he  would be happy to receive a call-up from  Coach Lamin Sarr’s team that will be taking part in the Africa U-20 youth championship in Libya in March.

“My desire has always been to represent my country and do something great for my nation,” Dampha added.

“I will not rule out the prospects of joining the U-20 team for but I am now focusing on the Olympics team to reach the championship,” he said.

Dampha was an integral force of the GPA’s successes during his time with the outfit before moving to to play for Neuchatel Xamax. 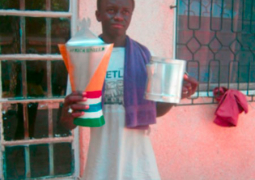