Despite his side's 3-2 defeat in the hands of Second Division league leaders against GPA at the Brikama Mini Stadium, the head coach of the Western Region outfit, Nema United, Sanna Yaffa, commended his boys for their brilliant performance.

Coach Yaffa stated that his boys played to the optimum and had numerous chances in the game but could not make the best use of them.

He expressed optimism that Nema United will bounce back to their winning form as the league progresses.

He further stated that they will prepare well for their final game against Kaira Silo, at the Serrekunda East Mini Stadium.

He thanked his fans for supporting the team from the onset, and assured them that they would gain promotion in the next season.

He further appealed for both financial and moral support, as he put it, that will gain them promotion to the First Division.

Nema United are currently ranked at 4th position in the league table, with 23 points in sixteen games and a game in hand against Lamin FC. 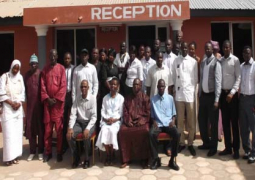