Lawyer Moses B. Johnson Richards, a former high court judge and magistrate, who is standing trial charged with giving false information and sedition yesterday opened his defence at the Banjul Magistrates' Court before acting-Principal Magistrate Alagba.

In his testimony, Richard told the court that he resides at Pipeline in the Kanifing Municipal Council, and he is a barrister and a solicitor.

He said that he has being a magistrate for eight years before being appointed as a high court Judge, and he was the Principal Magistrate at the Kanifing Magistrates' Court.

He added that in his eight-year career, he served in only two magistrates courts, Kanifing and Bundung respectively.

Richards pointed out that when he was appointed as a judge he was studying in the , in June 2008, and he was sacked in April 2010 and became a private lawyer.

He added that he has never been a party to any political party in this country, and he never had any problem with the police before.

Richards revealed that his father’s name is JoJo Richards, and he worked for 38 years at the then and his mother's name is Jackle Richards, who also worked for 36 years in various government departments.

"In November 2010, one Pa Ebrima Colley, who happened to be the alkalo of Jabang village came to my office and told me that the Sheriff of The had called him to his office.

"Pa Ebrima Colley further told me that, when he went to answer, one of the bailiffs took him to the Sheriff's office, and the Sheriff informed him that lawyer Darboe and his people were following him to execute the judgment," Richards told the court.

He added that Pa Ebrima Colley explained to the Sheriff of The the incident that happened in 2007.

"I asked him whether it was a stay of execution of the said judgment, and he told me that the Sheriff of The had asked him to get a lawyer to write a letter for him," he further said.

He added, "I told him to go and get another lawyer different from me. May be the Sheriff wanted to assist, but I'm not the best person to write this letter for you."
He added that "two weeks later, a client of mine was kicked out of their premises, and I took the matter to the Chief Justice. So the Sheriff may not be happy with me, so it's better you get another lawyer, because the Sheriff of The would not help you on my behalf."

Moses Richards added that he recommended many lawyers to Pa Ebrima Colley, "but he insisted that I should write for him rather than any other lawyer, and I later recommended lawyer Kebba Sanyang which he agreed to, and went to see".

He added that, on 4th December 2010, Pa Ebrima Colley came back and informed him that Mr Sanyang said he cannot write any letter for him because he was at one time at the AG's Chambers, noting that Mr Sanyang told him to go and inform the security officers about the execution of the judgment.

He added that he informed the IGP and later Solicitor General, who told him to write a letter.

"The alkalo pleaded with me to write a letter for him, which I did under his instructions, and I asked him over and over whether what was narrated to me was exactly what happened, and he insisted that that was the true story he explained to me," Richards further testified.

"My instruction was that the bailiffs of the High Court went to Jabang village to execute the purported judgment because the people of Jabang had never been aware of any suit against them pertaining to the land issue."

At that juncture, the case was adjourned till today for continuation. 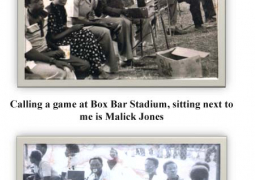 Youth arraigned for threaten to kill