One Lamin Conteh of Brikama recently testified in the trial of one Alieu Dumbuya, charged with rashness and negligence, causing death, at the Brikama Magistrates’ Court before Principal Magistrate Dayo Small.

In his testimony, Conteh said he recognised the accused and could remember 8 January 2014.

He said that on the day in question, he was on his way from Senegal to The Gambia together with the accused in his vehicle, which the accused was driving.

He added that upon reaching Mayork village in Foni, there was a man with his motorbike carrying a box containing bread.

According to him, when they went up to a junction, the motorbike rider took a curve without signalling while their vehicle was coming.

The accused tried to avoid him and the motorbike rider missed his way and knocked the accused’s vehicle with his head and sustained injuries.

He further stated that the deceased was riding a motorbike without wearing helmet on his head, but hung the helmet on the motorbike.

The witness further told the court that when the deceased hit the accused’s vehicle he was injured in his head, he said, adding that the police were informed and a sketched plan was taken.

They took the motorbike rider to the Bwiam Hospital unconscious and later pronounced him dead, he said, stating that he gave his statement at the Kalagi Police Station. 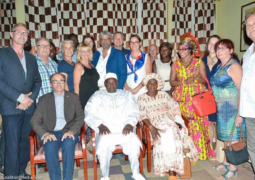