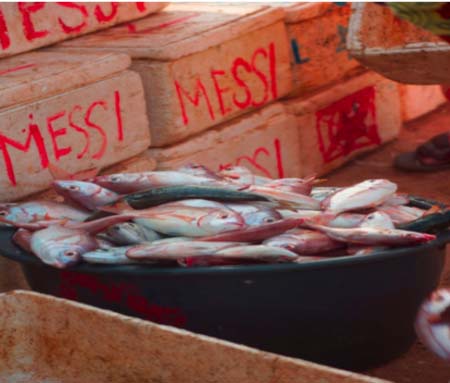 Mansour Ndour, lead facilitator at fisheries local committee (CLP) at the community of Ngaparou in the region of Thies, has called on NGOs and projects to emulate the Worldwide Fund for Nature (WWF) Go-WAMER project to better address food security and alleviate poverty in the country, particularly in the rural communities.

According to him, the committee is responsible of managing and controlling the fisherfolks to ensure they use the appropriate fishing gear and on the time of fishing.

He noted that management plan and other regulatory measures are in place to safeguard the resources, and ensure resources are sustainably harvested to ensure their availability at all times.

Mr Ndour further point out that the Go-WAMER project through WWF has provided a substantial amount to support the activities of CLP to ensure that fisheries resources are not overexploited.

He highlighted some of the progress realized by the CLP, which included capacity enhancement and sensitization for the fisherfolk on fisheries issues.

He said the committee got substantial monies mainly from fines, membership contributions and royalties from the fishermen, and this money is used to support the running cost of the committee and also the families of fishermen, accidents and other social functions that have a connection with the fishermen.

Wore Signate ,a member of CLP responsible for commercialization of fish and fisheries product, stated that progress has been made compared to the previous years when fish were scarce due to over-exploitation and the use of wrong fishing gear at sea.

The CLP is found at all the fish landing sites to monitor and work with the fishermen to ensure that rules are followed for the benefit of all.

Some of the key activities the CLP conducted were on sanitation and hygiene, and to create market linkages for them and give them entrepreneurial skills to be able to increase their income-generation for livelihood improvement, he said.

Ms Amie NDIAYE, communication officer for Ngaparou CLP, hailed G-WAMER for their intervention and appealed for more support in the area of capacity building and awareness creation and materials.

She assured them (WWF-Go-WAMER) of the CLP’s continued collaboration in the best interest of poor local communities.

Taib DIOUF, head of the team, said the purpose of the visit was for their media partners to see for themselves the impact of the project on the fisherfolk communities, particularly in the areas where the project is intervening.

He added that Go-Wamer project “Governance, policy management of marine and coastal resources, poverty reduction and food security in the ecoregion WAMER”, is a community-driven project that seeks to address food insecurity and alleviate poverty.

Renewable energy: let’s go for it