As 'women in development' is an ongoing process it is incumbent on us to keep the issues in view for the purpose of achieving speedy progress.

There is no gainsaying or disputing to say that, women are more than ever playing a significant role in the economic and social development of this country. Womenused to be in the background of national development, with little to add to national agenda.

Today, the scenario has changed as women are actively engaged in all facets of social, religious, cultural, political and economic life of the nation. Women have become noticeably ubiquitous as entrepreneurs, lawyers, directors, and security personnel, ministers, etc.

The is the first African nations to have a woman Vice-President. Gone are the days when women got limited roles as housewives, nurses, secretaries, or low-paid staff in various organisations. Women are becoming more active in participatory development, thus registering greater economic progress in different domains of life.

This trend is generally  reflected in higher standards of living, greater literacy, and national economic growth, higher family incomes, and a visibly self-confident and forward-looking people. From the looks of it, this trend is here to stay.

One area, however, that seems to be logging is self-expression. Women are considered the most articulate and prudent, yet they don't generally speak out on national issues. They need to be vocal on issues that would have impact on the nation.

Expression must be the pursuit of women in our country's development. This is all the more important for breaking the traditional taboos, prejudice, and limitations against women that have had the effect of keeping them in the so- called traditional places and rendering them unable or unfit to contribute to development.

It is time now for all to encourage the all-out participation of the womenfolk, it is time for women themselves to make that positive breakthrough to self-expression. Women have rights, including freedom of expression, as now ever guaranteed in various declarations and protocols, more particularly the Universal Declaration of Human Right and the Maputo Protocol on Women's Rights.

If women express themselves more vigorously in the affairs of the nation, this would help bring quicker and greater progress. After all, it is women who form the great majority of this country. If women are left out in the development process, it would take that much longer to realise our goals. Their contributions, on the other hand,  would produce a more enlightened, progressive and forward-looking . 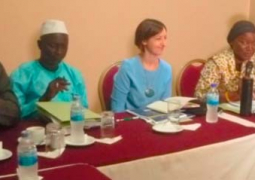