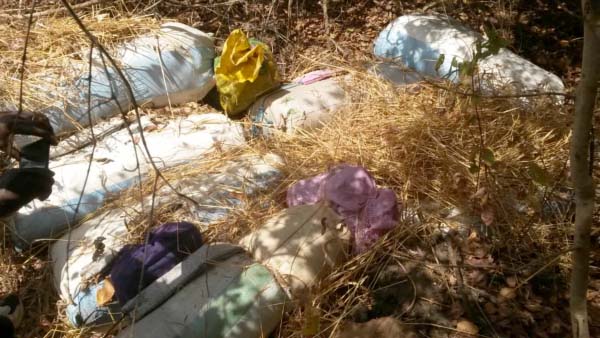 At the time of gathering the report, no suspects had been arrested in connection with the haul. A source that spoke to our reporter on condition of anonymity said the suspected bags of cannabis where found in the bush by an individual.

Our source further added: “No one is claiming ownership of the eight bags of cannabis. Narcotic officers are currently investigating to unearth the suspect (s). But I can tell you that at the moment no suspect has been identified.”

The spokesperson of the DLEAG, Ousman Saidybah, confirmed the development to our reporter. He said: “Upon receiving the information about the bags of cannabis, our officers lay an ambush in the bush. Unfortunately, no one was arrested. However, investigation into the matter continues.”

The eight bags of cannabis, he went on, contained two hundred and five (205) big bundles of suspected cannabis. On the method of concealment, the DLEAG PRO said, all the 205 bundles were concealed in big white and blue sacks which were later hidden in a valley-like place and covered with dried grasses in the bush of Chamen village.