Gambia National Female team suffers their first defeat in the hands of the selection team that is drawn from various female first division teams at the Independence Stadium in Bakau.

Musu Bojang, a diving header opened the score for the female team selection after a goal-keeping error and the goal that proved as the winner.

The national female team missed a lot of scoring chances but seem to lack concentration in front of the opponent's goal, and thus squandered their numerous chances.

The Head Coach of the female selection, Manga Jarju, shortly after the game, revealed that he was totally unimpressed with the performance of the female team. He added that "the players lack total concentration and commitment."

Coach Jarju went on to call on the players to double up their effort in order to achieve better result in the WAFU Tournament, scheduled for .

Meanwhile, Coach Buba Jallow who is expected to take over as the national female team coach is expected to name his 18 women squad that will be travelling to , shortly after another friendly against the female selection on Tuesday at the Independence Stadium. 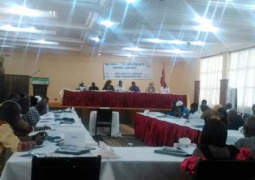