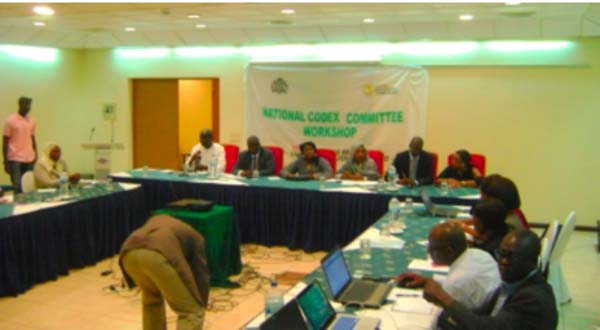 The workshop gathered organizations to discuss how to enhance the capacities of committee members to effectively participate in the works of the Codex alimentation commission, World Animal Health Organization and International Plant Protection Convention aimed at enhancing food safety, animal and plant health issues.

Giving the opening statement, Rohey Bittaye, said the government is concerned about the safety and quality of food produced, imported and consumed in the country.

The FSQA has demonstrated and produced commendable results in terms of enforcing its regulatory function, in line with international recommended regulations and practices mainly based on Codex guidelines, she said.

She acknowledged support given by AU and PAN-SPSO project, which has enabled The Gambia in terms of capacity building to enhance participation in the standard-setting processes of Codex, OIE and IPPC.

The Gambia has demonstrated and is still demonstrating policy and political commitment to the safety and quality of food produced, imported, exported, and consumed in the country, as seen in Vision 2016 and Vision 2020, she further stated.

Dr Raphael Coly from AU-IBAR said the workshop is a collaborative effort between the United States Department of Agriculture (USDA), which provided funding and technical support to hold the workshop, US Codex office and the African Union Inter-African Bureau for Animal Resources to support the national Codex committee of The Gambia.

The commission was mandated to protect the health of consumers, coordinate all food standard works of government and non -governmental organizations, determine priorities initiated and guide preparation of drafts and other responsibilities, he added.

Mariatou Njie of the FAO said ensuring food safety is a public health priority, and an essential step in achieving food security, effective food safety, adding that quality management systems are key to safeguarding the health and well-being of people.

It fosters economic development and improves livelihoods by providing access to domestic, regional and international markets, she went on.

The Codex Alimentarius Commission established by FAO and WHO in 1963 develops harmonized international food standards, codes of practice to protect the health of consumers, and ensure fair practices in food trade, she continued.

Mrs Njie said the commission has stimulated activity in the field of food chemistry, technology, microbiology and others.

She added that the volume of world food trade is enormous, and is valued at between US$300 billion and US$400 billion.

FAO has provided a range of support to The Gambia in the past through the committee, NaNA and the department of Agriculture to create awareness and strengthen food safety in the country, according to the FAO official.