Bala Saho, the Director-General of the National Centre for Arts and Culture, NCAC, has been speaking about the digitalised project, initiated by him during his preliminary research.
Mr. Saho was speaking in an interview with The Point's cultural affairs writer on Wednesday at his office.
He explained that during his research, he noticed that some of the items at the NCAC at the time needed urgent attention to be digitalised.
According to Mr. Saho, plans have also been worked out about the digitalisation project and that at the NCAC, they have been discussing ways and means of restoring and preserving some of the valuable cultural materials.
"When I returned to the US , I spoke with my professor, and then we wrote to the British Library and they gave us a little money to do a pilot project. That is, to digitalise just a selection of the materials, that are mostly in danger.
What we are doing now is to provide a sample copy to the British Library. If they are satisfied with it, they will let us put in bigger proposals, so that we can begin to digitalise the whole project, and possibly extend this to other areas in the country."
Mr. Saho went on to explain that the NCAC is always ready to sensitise the general public about their programmes by liaising with the media houses to tell them about the role of the NCAC. Every Gambian, he said, should take the responsibility of preserving and promoting the arts in this country.
He added that the target of his office is to bring together all musicians in the country, and to re-organise the Gambian Musicians Association.
"We want to talk to all aspects of the arts whether music, art, painters, artists, among others," he concluded. 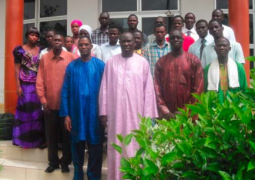