One might be tempted to question the possibilities of the Sports Journalists Association of The Gambia's chance of lifting the title as they are always considered as underdogs. But if their wonderful performance in the opening game of the first-ever memorial football tournament, organised by the country's biggest and the only sports journalists association against the Ministry team is anything to go by, there is a great possibility for them to achieve their first title as the team is set to battle it out in the Friday's final against Youth Ambassadors of Peace, at the Serrekunda East Mini-Stadium.

The Sports Journalists team under the inspirational leadership of Coach Dodou Bojang, who became the first-ever Sports Journalists coach to guide the team to the final enjoyed an impressive 1-nil victory over the determined Ministry of Youth and Sports' side as part of the opener at the Serrekunda East Mini-stadium last Friday, courtesy of Babucarr Sey's brilliant close-range-header in a highly-anticipated match under the gears of an unimpressive crowd.

The goal came through the midfield to the left wing when Pointsport assistant head of sport Lamin Drammeh's individual brilliance culminated in a pass to Striker Alagie Fatty of West Coast Radio, who unselfishly chipped in from a clever right footed cross. Thus, an unmarked danger man Babucarr Sey wasted no time to fire home from a spectacular close-range-header pass the Ministry's goalkeeper Fofana who rescued his side from going home with a 2-nil defeat as he brilliantly denied the Pointsport's anchor Lamin Drammeh from celebrating the journalists second from a poor spot kick. This is moments after Babucarr Sey had given the country's pen pushers and presenters a deserved lead.

The journalists team led by GRTS’s Dodou Bojang have since on Monday resumed an intensive preparatory programme at the Serrekunda West Mini-stadium ahead of what promises to produce a mouth-watering late Fatou Mbye memorial football final when they faced Youth Ambassadors of Peace, who eased pass the Gambai Football Coaches Association in the other opener at the Serrekunda West Mini-stadium last Friday.

As part of their preparatory effort ahead of Friday's final, Dodou and his side will travel to Serrekunda East Mini-stadium for a two-day training session on Wednesday and Thursday, to familiarize themselves with the conditions of East pitch ahead of Friday's most anticipated final.

In a Similar development, Interior female team will rub shoulders with Kanifing Municipal Council female team in the other final of the eight (8) team tournament, which is staged by sports journalists for the first time in honour of their late colleague Fatou Mbye, who passed away on October 31 of last year after a brief illness.

Both finals will be played at Serrekunda East Mini-stadium on Friday, starting at 3 pm. 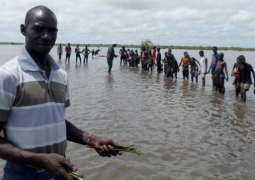