The National Assembly last Wednesday convened a donors round-table conference, where it presented its strategic investment and development plan to donor partners to seek commitments of funding from them.

The resources that will be mobilised through the donors' conference are meant to support the successful implementation of the 2010-2014 Strategic Development and Investment Plan of the National Assembly.

In a launching statement on behalf of President Yahya Jammeh, the Vice President and Minister for Women's Affairs, Isatou Njie-Saidy, said the conference is geared towards soliciting the support of the donors and partners in the implementation of the 2009-2014 first-ever strategic investment and development plan formulated, validated and adopted to support the National Assembly.

"This plan is intended to translate my Government's vision to promote the application of international best practices in advancing good governance, especially for the legislative arm, whose role on overall development need not be over-emphasised," she explained.

According to her, the Government has always been fully concerned and appreciative of the need for a vibrant, robust and pro-active legislature, and a legislature that is responsive to the needs and aspirations of the Gambian people.

She noted that the Investment and Strategic Plan laid before the donors was one that sums up in a single document, the strategic direction that they wish to follow, to promote lasting excellence in parliamentary functions and capabilities.

In his keynote address, the Speaker of the National Assembly, Hon. Abdoulie Bojang, described the event as a landmark event, marking in earnest, the official launch of resource mobilization for the Assembly's development and investment plan 2010-2014.

According to Speaker Bojang, the estimated total cost of his institution’s development and investment plan is over US$ 26 million.

This, he said, includes the building and resourcing of a new state-of-the-earth National Assembly building, to which the government has already provided funds for up to US$10 million.

He recognised and appreciated with gratitude the esteem support and expert guidance of UNDP-The Gambia, for their support to the capacity building of the Assembly since 1996 and, in particular, their current support to the articulation, development and adaptation of the plan and the convening of the donors’ conference.

At the end of the conference, interventions, questions, answers and pledges were made by individuals and institutions in kind and cash, including offers of capacity building training for .

According to him, this comprises activities that aim to enhance the representative, legislative or oversight capacity of representative institutions in the governance process.

"Capacitated parliamentary institutions are critical to the establishment and consolidation of democracy, since they empower ordinary people to participate in the policies that shape their lives," he noted.

Four charged with trafficking in person 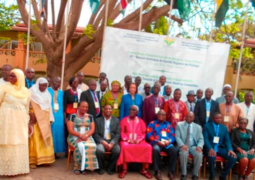