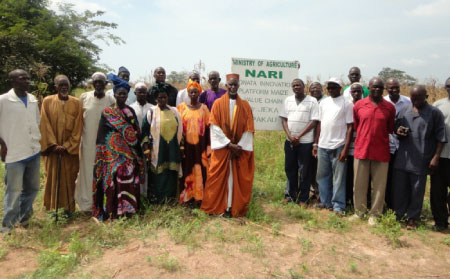 According to officials on tour, the visit to the fields was meant to assess this year’s cropping season.

It was meant for NARI officials and board members to go on the ground to see for themselves the performance of the farmers at the field level in this year’s cropping season.

At a farm in Basse Manjanjang Kunda in the Upper River Region, Demba  Jawo, a farmer, hailed the delegation for the visit, adding that this is what is expected from Agriculture officials.

Speaking at a field in the Lower River Region, Jarra West Chief Alfusainey Jarjusey hailed the delegation for visiting his farms.

He said that the seed that was provided to them by WAAPP prior to the season has yielded dividends, with the good produce yields.

He thanked the WAAPP for their consideration in ensuring that farmers were given seeds and fertilizer on time.

The acting director general of the Department of Agriculture, Musa Huma, said the purpose of the tour was for NARI board members to look at what NARI is implementing at the farm level.

He went further to state that during the three days, what he saw on the farms was very impressive, and that most farmers are optimistic of getting a bumper harvest.

Huma asserted that agricultural development involves a lot, but there are three main pillars that are involved in the development of agriculture.

According to him, they include the farmers, research, and the extension workers, noting further that the extension workers are playing a very vital role in the dissemination of information at the farm level all geared towards helping farmers in the improvement of their agricultural productivity.

Speaking during a courtesy call on the North Bank Region Governor, before going to the farms, Governor Queen Jammeh hailed the delegation for meeting the farmers at the grassroots level.

He said such moves would greatly encourage the farmers to do more than what they have done this year.

He added that the importance of keeping data in the development effort is key, adding that the encouragement of the local community in keeping data is equally important.

Governor Jammeh went further to state that no mater how small or big a project may be, it is also important to have material evidence to show where it has started.

He then used the opportunity to thank the delegation for their effort in meeting the farmers, to know their constraints and challenges.

NARI board chairman Saikou Taal commended the farmers for their active participation in applying the appropriate method in ensuring that this year they have attractive farm yields.

He said looking at one of the innovation platform farms in Basse Mansajang, it was an eye catching farm that has a lot of potential in producing a high yield.

He went further to encourage the farmers to continue their hard work, and to make sure that they keep some of their produce for next year.

In his overview of the tour, the director of Research at NARI, Lamin Jobe, expressed similar sentiments and appreciation for what he has seen on the ground at farm level.

He then used the opportunity to encourage the farmers to continue their hard work, and to continue applying the best method that can yield them a better produce.