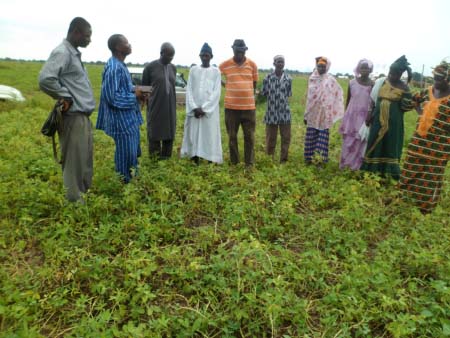 The governing board of the National AgriculturalResearch Institute (NARI), which comprises individual representatives from the University of The Gambia, Ministry of Finance, Ministry of Agriculture, Forestry and Natural Resources, NGOs, NAWFA, Department of Agriculture and NARI,recently concluded a four-day nationwide tour on innovation platform farms supported by WAAPP across the country.

The board was established by an Act of Parliament in 1993 and mandated to set up an institute of research to mobilize resources for NARI.

The delegation, which began the tour at the Lower River Region, was led by the director of research at NARI, Lamin Jobe.

The tour was part of the board’s annual routine meant for the governing board members to go out to the field and meet with partners, farmers, extension services, to discuss with them issues affecting their farming activities, achievements and impact, to get firsthand informationand plan for the following year.

Speaking to our reporter at the Jenoi Agricultural Centre, the director of research, Lamin Jobe, said the purpose of the tour was for the board members to be on the ground exchanging ideas with farmers on issues affecting them and make some recommendations in the quest to improve agricultural productivity.

The importance attached to this tour cannot be over-emphasised in the sense that the information that will be provided to the board by the famers will greatly help the board to exercise their duties to know the actual problems on the ground that have affected their agricultural yield, he said.

The board, he remarked, has been visiting WAAPP project sites to know actually what are their constraints, how to trigger faming activities and chart a way forward in addressing their challenges.

He also thanked the board for the steps it is taking in terms of talking to farmers at their own farms trying to establish firsthand information regarding issues affecting them in their agricultural farming system.

The board members have demonstrated a very good initiative in trying to encourage the farmers to be more active in improving their agricultural productivity, he said.

During the tour, a lot of concerns were raised by the farmers and extension services, which range from delay of distribution of fertilizers to facilitation of movement of extension workers, unavailability of seed on time, and fuel allowance from the supporting project of WAAPP.

These constraints, according to the board members, were well noted for serious consideration and solutions to them.

He added that he was impressed and satisfied with the innovation platform farms, particularly that of Boiram village in the Central River Region south, whose crops are very promising.

Mr Jobe said that going by what he has seen so far this year in Boiram village, some of the farmers “will score minimum four tons per hectare” of upland rice.

“This is a big achievement for the farmers and it’s a clear indication that farmers in Boiram have applied the best method in their farms,” he said.

He said achieving bumper harvest of rice is in line with the vision of the President, who wants to ensure that by 2016 there is no importation of rice by The Gambia, which the community of Boiram is working towards.

For his part, the chairman of the board, Dr Saikou Taal, said the board is mandated to formulate policy and guide the efficient administration of NARI, noting that its functions include priority research setting, annual budget for NARI, and mobilizing resources.

One of the mandates of the board, he noted, is to monitor and evaluate NARI activities in the field, which was one of the reasons for the tour.

He said he was satisfied with what he saw on the farms, for the crop this year he believed the farmers had applied the best method.

He also commended the farmers in Boiram village for adhering to the advice of the extension workers and for adopting the best practices.