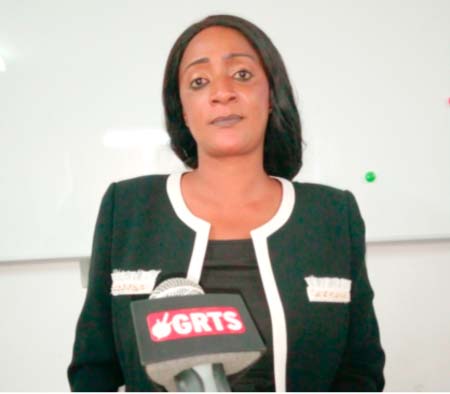 Director General of the National Agency Against Trafficking in Persons (NAATIP) has called for more collaboration from travelling agencies and the media to end modern slavery, commonly called human trafficking, in The Gambia.

Tulai Jawara-Ceesay was speaking on Tuesday, during the Agency’s day training sensitization of travelling agencies and journalists in the country on the dangers and consequences involved in human trafficking held at the Ministry of Justice in Banjul.

“It is because of this, we feel the need to closely work together so that we can eradicate the menace of modern day slave trade. It is a global concern, so we are all part of a global effort to fight and eradicate trafficking in persons within the country and outside,” she said.

She said: “The most common forms of trafficking in persons in The Gambia is the International Labour Migration where most Gambians travel to Middle East countries to work as house girls.”

According to her, The Gambia as a country has signed and ratified the Palermo Protocol that serves to prevent, suppress and punish those involved in trafficking in persons especially women and children. She said the Protocol supplements the United Nations Convention Against Trans-national Organized Crime.

She appealed for people and institutions to come together and make the roads safe at all time, reminding that the lives one saves may be their own.