The National Assembly Select Committee on Education and Training led by its chairman Hon. Sulayman Joof, Member for Serekunda West, at the weekend concluded a two-day tour of facilities of the (UTG).

Speaking to this reporter at the end of the familiarisation tour, Hon. Joof said the tour was a fact finding mission "but not fault finding".

"The efforts are all geared towards helping the UTG and the country to contribute to the attainment of quality education," he said.

The UTG is an institution all Gambians and non-Gambians are proud of, he says, adding that he was impressed with the refurbishment taking place at the of the university.

The work going on at the UTG, he affirmed, "is an indication that the funds given to them by the UNDP were used for the purpose" for which it was meant. "The integration they are yearning for is beginning to yield dividend," he added.

The interaction the select committee team had with the Dean at the UTG Chancery and lecturers at the were "very successful", he said. He also commended the consultant of the construction project, Malang Jammeh, and the Army engineering team at the new UTG site under construction at Faraba Bantang, for a job well done.

Briefing the members of the touring about his institution’s ten-year existence, UTG Vice Chancellor Professor Muhammed Kah said the visit was holistic and important.

"The partnership and collaboration with the legislature is very vital as we chart forward because all the National Assembly Members represent the largest number of the society, so we at the UTG work very hard to serve the people of this nation to our utmost best," he said.

The more the UTG is closer to the education committee, the better for the entire higher education system, he says: "And we at the UTG will do our best to share with you, , a peak into the life of the UTG."

According to Professor Kah, the UTG started and operated for four years at the campus of the Faculty of Law in Kanifing but for lack of enough space, students were running from one school block to the other to receive lectures.

"We then got funds from the UNDP to buy books and also construct a computer laboratory for the Law school because in the 21st century everyone has to be digitally capable," Dr Kah told parliamentarians.

He said that through the faculty of they were able to enhance access to legal education in the country by attracting many legal scholars in The Gambia who have offered their time to teach, key among them were the Chief Justice of The Gambia, Emmanuel Agim, and the Minister of Justice, Eduward Gomez.

"Many young Gambian students have been enrolled at the to study Law and we believe that the will be a force to be reckoned with within the sub-region," he ended.

During the tour lawmakers visited the Faculty of Law School in Kanifing, the UTG Chancery's main campus in Brikama, where they held briefing with senior management, deans and heads of departments, as well as inspected the facilities.

The team visited the UTG new complex site under construction at Faraba Bantang, the in , and the UTG medical facilities at the RVTH. 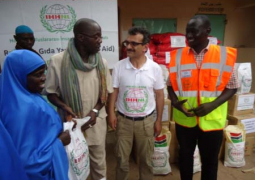